The Penalty for Holding by Georgette Gouveia 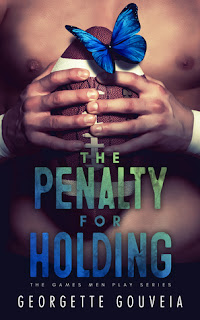 The Penalty for Holding by Georgette Gouveia

Official Summary: When the quarterback of the hapless New York Templars is injured, backup QB Quinn Novak takes the team to the playoffs. There he attracts the attention of two other quarterbacks who’ve been rivals since high school – Mal Ryan of the Philadelphia Quakers and Tam Tarquin of the San Francisco Miners. Quinn begins a volatile relationship with the narcissistic Mal and a loving one with the open-hearted Tam, keeping each secret from the other.

What he doesn’t know is that the two have a complex sexual history of their own. Quinn will have to overcome a thorny present as well as a troubled past if he hopes to have a promising future.

Review: I gave this one two stars, but sometimes I think that's too nice. The Penalty for Holding is a difficult book to review. It's definitely a book that went in a direction I was not expecting. I will say that I didn't like the way it was written though - and the pace of the book was a bit too jumpy. There were moments in the book that seem to come out of the blue, without any specific explanation. I wasn't a fan of the ending either, because I just felt like it gave a bad representation of being gay. I can't really explain without spoiling the book, so I'll leave it at that.

There is also a case of domestic violence between two gay men that could have been great, but it was very lackluster. The topic wasn't focused on enough or fully addressed in the book, though there's a sense it will be in the future. It's a tricky topic, and it just didn't work for this book.

Obviously I finished the book, so it wasn't completely awful. There were moments that I enjoyed. I just felt like nothing really worked out in the way that I hoped/wanted. Definitely not something I can recommend, I'm afraid.
Posted by Shooting Stars Mag at 12:00 AM

Oh dear :( This sounded like it had great potential...

Sorry to hear this one didn't quite work out...

You don't see gay relationship domestic abuse covered much, that's too bad it wasn't done better. Sorry this one didn't work for you.

So, with the way your descriptions sounds, was it a menage type of story? It's too bad it didn't work for you. I hate when there is potential with a story but it doesn't pan out.