Outside the Lines by Anna Zabo

First off, I'm so sorry I've been a bit MIA on here. I hope to get back into the swing of things in the New Year!! If you celebrate Christmas, I hope it was wonderful. And Happy New Year!! 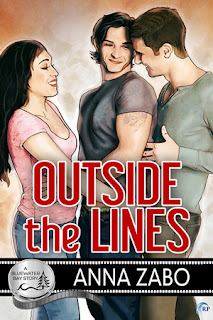 Outside the Lines by Anna Zabo
Review by Lauren
Source: copy from Netgalley; all opinions are my own
Official Summary (add on Goodreads): Miniature artist Ian Meyers has one week to rebuild his damaged set. Needing help, he goes to End o’ Earth, the local comic and gaming shop. Owner Simon Derry pushes all of Ian’s buttons, and he also has steady hands and the skills Ian needs.
Before they can even grab a beer, Ian meets Lydia Derry, Simon’s wife. If Ian had any interest in women, he’d suggest a threesome, but then Simon explains that he and Lydia are polyamorous, and if Ian wants Simon, neither of them will complain. If anything, Lydia encourages the relationship.
Ian’s all in, and it’s fantastic working with Simon to piece together his set and then take each other apart at night. His friendship with Lydia grows too. The only problem is, the more time he spends with Simon, the more he wants everything Simon already has with Lydia: A house. A cat. A commitment. So Ian runs, and shatters the trust he has with them both—right when they need him the most. Piecing their relationships back together might prove harder than a smashed set.


Review: This is the 22nd novel in the Bluewater Bay series, but believe me, they can all be read as stand-alones. In fact, most of the books are written by different authors throughout. Outside the Lines is actually the second to last in the entire series, and it’s one that I really enjoyed. The TV show Wolf’s Landing is filmed in Bluewater Bay, so the famous and the not-so-famous cohabitate, and that’s the overall focus of these books. Outside the Lines is about Ian, who makes miniature sets for the show, and Simon and Lydia Derry – a polyamorous married couple. While Simon and Lydia are married, being poly means they are welcome to pursue other relationships too and that’s what Simon does with Ian. I thought the whole relationship between the three main characters was handled really well and with a lot of respect, and it helps explain how a poly relationship works. There is some brief angst/drama, but it just helps them all become a stronger unit. Also, I should note that Simon and Ian are in a sexual relationship, but Ian isn’t in one with Lydia as he’s gay – he does however grow to love and care for Lydia as a friend/family member.
Posted by Shooting Stars Mag at 12:29 PM 6 comments: 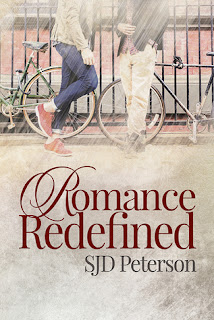 Review: I really loved the premise of this one! Ben has loved Hugh for years, and it's obvious he would still be with the man if he thought Hugh could give him what he wanted. What that is is essentially emotion - and attention. Hugh closes himself off, even with Ben, and he doesn't always treat Ben how someone should if they are really in love. Also, Ben has dreams of his own and he wants the chance to pursue them on his own terms, instead of just using family money to get what he wants. What made me not love this book quite as much is that I didn't think there was enough of Ben and Hugh working on their relationship. Yes, they are in each others lives throughout the book and getting pulled back into each other's orbit, but it didn't seem like the bigger conversations and/or revelations happened until later in the book and I would have liked it more throughout. Regardless, I did really enjoy this one! It's an intriguing look at a relationship - a bit of a second chance romance, if you will.
Posted by Shooting Stars Mag at 12:00 AM 5 comments: 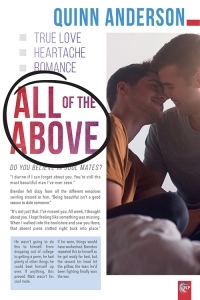 Official Summary (add on Goodreads): Brendon isn’t in a rut, per se—he just always seems to be in-between things. Jobs. Degrees. Boyfriends. He never finishes what he starts. The perfect path is out there somewhere, and if he can just figure out what it is, he’s certain everything else will fall into place.

The last thing he expects is to meet his soul mate in the pages of a magazine quiz. “Who Is Your Perfect Man?” by Matthew Kingston seems like a road map to his future husband: the author himself. Brendon may not have his life figured out, but if Matt is as romantic as his quiz, Brendon can check “true love” off his to-do list.

When Brendon fakes a meet-cute between them, Matt proves to be as wonderful as he hoped. The more Brendon gets to know him, the harder he falls. But Brendon has a confession to make: how can he explain to Matt that he arranged their “fated” meeting? Brendon can’t tell if he’s found his soul mate, heartache, or all of the above.

Review: I gave this one 3 stars on Goodreads, and I often find those middle of the road reviews to be the most difficult to review sometimes. I liked aspects of All of the Above, but it was definitely not a favorite of mine and it's not something I could really recommend to just anyone. I think the whole "meet cute" idea is kind of fun, though the fact that Brendon orchestrated his could be seen as a bit creepy. Granted, I don't think he does anything too out of the box and he's obviously a good guy. I think my biggest issue with the book is that these two just didn't really seem to go together for me. There is an intriguing part later in the book where the two of them tell each other the things they don't like about each other (it's kind of the middle of an argument, so it's not out of the blue) and I was thinking "Yeah, they are kind of right...why do they like each other so much?" It's definitely a cute read, but again, it didn't really click with me.
Posted by Shooting Stars Mag at 12:00 AM 3 comments:

Email ThisBlogThis!Share to TwitterShare to FacebookShare to Pinterest
Labels: All of the Above, book review, m/m book review, Quinn Anderson 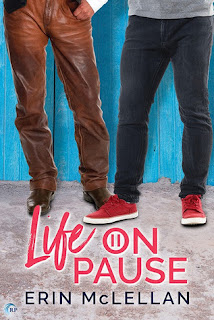 Another aspect I really liked about Life on Pause are the secondary characters, from Rusty's family to his co-worker/ex-boyfriend, to Niles' best friend. It added a lot of layers to the story so that while the relationship aspect was fraught with difficulties, the book wasn't entirely about Rusty and Niles' love life. This is the only book I've read from McLellan so far, but she's someone I'll keep an eye out for in the future!
Posted by Shooting Stars Mag at 12:00 AM 3 comments: