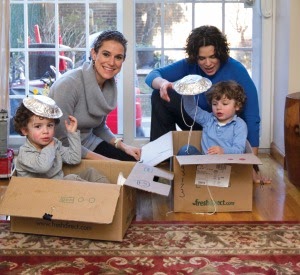 I do not own the above photo. It was taken from the article on parenting.com
There was an article in Parenting magazine called "Meet the Same Sex Parents Next Door" and was written by one of the ladies above. It's all about how her and her wife deal with raising twins when it's just them...two moms. While they worry that some people will make a fuss, she was surprised that sometimes it didn't happen and she internally freaked out for nothing. It's very interesting to read, as I'm sure I'd be the same. You aren't sure how people are going to react to you and your life...so you get weary, and when you're proven wrong, it's a surprise. A welcome surprise, of course.

You can actually go here to read the whole article and see pictures of their lovely family. What adorable boys, right? I will warn you that not all of the comments left on the site are nice. Some are quite rude and close-minded. Yes, everyone has a right to their opinion but I feel some of what was said was way beyond having a particular view...so be forewarned if you visit and decide to explore the comments. The first one I saw is an example of this, so it might be something you glance over even without wishing to.

In my opinion, I think it was a great article. I actually read it in the magazine first and looked it up to share with everyone here...which is how I saw the comments. I think Parenting magazine should be praised for publishing this, even though many obviously do not agree and no longer wish to read the magazine. That's up to them though. For me, I think it was great.

If you want to read the article and share your own thoughts, feel free to do so. I'll only delete if things get mean or directly attack someone else...other than that, feel free to be honest and engage in discussion.

I've never read Hero by Perry Moore...but I do own the book. And not only do I own it, I actually bought it, which I figure I should mention since we all know that bloggers owning a book doesn't mean they bought it. I just want to say that, because right now is a good time to be supporting Perry Moore and his work.

On February 17th, I believe, Perry Moore passed away at the age of 39...which is just wow. That's so young and this incredibly sad. I really do hope to move Hero up on my list of TBR books so I can post my thoughts on Let's Get Beyond Tolerance.

For those that don't know, Perry Moore was an out author and executive producer of The Chronices of Narnia. Hero is actually about a superhero that happens to be gay.

If you want to buy the book, we get a small percentage for the site if you use our link (Amazon Associates) but you don't have to. Feel free to get the book however you wish.

Has anyone read Hero and have thoughts already? Or just something you want to share about Perry's life and death?

I found this information on After Elton and you can read more about it here. 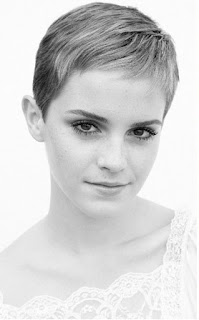 Do Not Own
By now, everyone knows that Emma Watson played Hermione Granger in all the Harry Potter films (last one coming out this summer!) However, we finally have news of her next Post-Potter project and I for one am thrilled that the rumors are true.
Emma will be starring as Sam in the movie adaptation of The Perks of Being a Wallflower by Stephen Chbosky. This is one of my all-time favorite books...and it's great that the author is actually writing and directing the movie, so no complaints you book purists! :-)
You can read an article about it on Just So You Know, and even vote with your thoughts on Emma playing Sam. ﻿Actor Logan Lerman (Percy Jackson) will star as the main character, Charlie. Sam is his friend/love interest...for those that aren't familiar with the book. I recommend you read it ASAP. It's one I love to go back to time and again.

And again, if you have not read this book...I posted the news here because there is some LGBT content in the novel. Just so you're aware!
So what do you think? Have you read this? Are you excited about Emma and Logan? If not, who did you want?
~Lauren
Posted by Shooting Stars Mag at 10:55 AM 2 comments:

Email ThisBlogThis!Share to TwitterShare to FacebookShare to Pinterest
Labels: emma watson, logan lerman, steph chbosky, the perks of being a wallflower

Official Summary: One of the strangest (and funniest) love triangles ever to hit YA fiction, when a pair of twins (one boy, one girl) both fall for the boy who moves in with them…who may or may not be a vampire.


GEMINI BITES explores what it means to pretend to be something you aren't, what happens when that backfires, and how in-your-face honesty is almost always the best course of action.


Review: While it's not certain if Garret is gay or straight...or even bi...Kyle is out and well, pretty much proud of who he is. He's never dated anyone, but had some experience with guys and his best friend happens to be gay as well. Kyle is pretty amusing as he's a huge exaggerator and yet he finds himself starting to become more and more interested in Garret who swears that he's a vampire. Well, one of their fellow classmates seems to believe it and he'll do just about anything he can to rid their school of evil...even if that means ridding them of Garret altogether.


As for Judy, whenever she finds she likes a guy...she starts to become "interested" in whatever they like and her recent conquest is all about the bible. But when Judy realizes that Kyle is starting to like Garret, she can't let her brother win, can she?

The book is told in alternating chapters...first Judy, then Kyle, and so on. I seemed to enjoy Kyle's story line a little more...but then again, I did first pick up this book for the LGBT content and that would be Kyle. He's also a funny character and you really do start to care for him and the way he's treated by Judy. This is especially poignant since the twins come from a big family and it's hard to find time with their parents.

Judy is a good character to though. She really goes through her own progressions and you'll find yourself shaking your head, yet letting laughter slip out, at some of her more mean statements.

In all, both teens are well-rounded and I felt like you got to see a big picture of who they were and what they were interested in. Kyle wasn't just the horny teen guy obsessing over boys...and Judy wasn't just a mean "actress" trying to get a boyfriend. You even see an interesting side of her, good and bad, when it comes to her best friend, Sasha. This girl was an amusing character, but you do feel for her as well...and it reminded me a lot of Brittany on GLEE. She's a bit ditsy and clueless and yet can see things that other people look over sometimes. You just have to love her!

As for their family, they were a lot of fun. The three younger siblings were a bit hard to keep straight sometimes...but the eldest, Tommy and Dexter, seemed to be their own people in the little time they had to "shine." Their parents were also very sweet and you could tell they cared and wanted to be there for their kids as much as they could...even though it's hard with a house full of them.

I'm really thankful I was given the chance to read Gemini Bites. I would definitely recommend it!


Amazon Associate: Buy the book, we get a small percentage!
Posted by Shooting Stars Mag at 4:57 PM 2 comments:

LGBT News of the Week 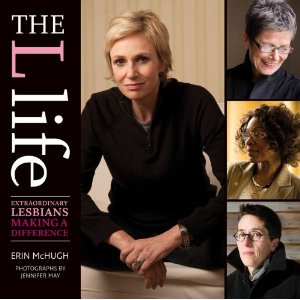 According to After Ellen NBC has picked up a show called I Hate That I Love You which involves a lesbian couple. While they do have a little complaint about the show, this is still something to be excited about. I can’t wait to hear more.

Also on After Ellen has revealed that Brian Falchuk, co-creator of Glee, tweeted that Brittany and Santana are “on” which means they are dating. To read more, go here. I’m really excited they are having a lesbian couple as well as having Kurt and Blaine…I do agree with some of the comments though. I hope this is serious and not just some one-off or whatever.

Oh, and apparently there is a RENT episode coming up? RENT is my favorite musical so I’m stoked!

You can now honor your favorite Glee characters by wearing their very own nail polish. This collection comes from Sephora.

My personal favorite, Kurt Hummel, has a green polish called Gleek Out.

The League of Extraordinary Writers discusses gay teens in YA Science Fiction and Fantasy. It's an interesting post...and I enjoyed reading the comments with book suggestions. I think more LGBT fiction for the YA range should be available in general though...

Email ThisBlogThis!Share to TwitterShare to FacebookShare to Pinterest
Labels: After Ellen, I Hate that I Love You, Jane Lynch, LGBT books, RENT, Sephora, The L Life


The book above was obviously written by this blog's co-creators, Lee Bantle. However...this is a book from last year. And now I'd really like to know what LGBT books are coming out in 2011. I've tried really hard to find a list, but it doesn't seem like anyone has one...I know of some books coming out that fall under this category but I'm hoping you all can help me so I don't miss any. Once I have somewhat of a list, I'll post them all up here for everyone to utilize. Leave your ideas in the comments or email: lauren51990 AT aol DOT com

And since it's February...I will take books that came out in January. It's always worth posting those for everyone to see as well.

So...what LGBT books coming out in 2011 do you know of? And they can be categorized under Adult...but be careful of those so they aren't inappropriate for the site. If you aren't sure, just send them over and say you didn't know.

Amazon Associate: buy the book from above...we get a small percentage
Posted by Shooting Stars Mag at 1:01 PM 10 comments: