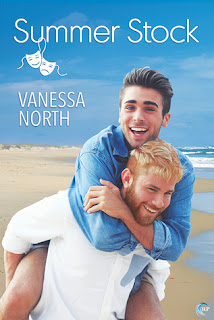 Official Summary: Tabloid scandals have driven TV star Ryan Hertzog to North Carolina’s Outer Banks, where he’s hiding out doing summer stock at his cousin’s seaside theater. When a hookup with local handyman Trey Donovan results in Ryan being photographed butt naked, he vows to keep his pants on and his hands off Trey. How was he supposed to know Trey would turn out to be the summer stock set builder?

Trey isn’t looking for a relationship; he’s still recovering from the emotional fallout of an abusive marriage. But Ryan’s laughter draws him in again and again, and he’s not about to say no to fooling around.

As the summer heats up, the paparazzi catch Ryan in increasingly compromising situations. Ryan might be too much drama for a summer fling—and Trey might be just an intermission from Ryan’s Hollywood life. But if they take their cues from Shakespeare, all’s well that ends well.

Review: I think it's safe to say that I love Vanessa North. The first book I read by her, Blueberry Boys, was fantastic and I loved Summer Stock just as much. It's really easy to love both Ryan and Trey. While Ryan is back in his hometown working on Shakespeare plays because of his bad boy antics in Hollywood, he's not a bad guy. He doesn't take himself seriously and he's more than happy to play the secondary character instead of the lead.

However, when his best friend ends up in rehab, he knows that he needs to
stay out of the press and get his life back on track before taking on Hollywood again.

As for Trey, he works on the sets every summer for Shakespeare by the Sea. He used to be married, but that relationship was abuse and his ex is now in jail. Despite this, he's open to the possibility of seeing Ryan after they have what was seemingly a one-night stand.

However, he still has issues in his past that he has to deal with and he seems to unintentionally sabotage their relationship because he doesn't feel good enough. It was sad to see, though perfectly understandable at the same time.

I loved seeing Ryan and Trey open up to each other and realize that they can be a good match. It's not easy and it doesn't take just the summer, but it's great when it finally all comes together! Highly recommended!
Posted by Shooting Stars Mag at 12:00 AM

This sounds like a sweet romance, with the laughter being what draws Trey out from what his abusive marriage did to him. Sounds like you enjoyed it too! Great review!

I love when couples open up, and really communicate in a book. It just makes a romance seem very real to me. Sounds good.

I know that miscommunications can be a good trope for a book, but open communication are actually even harder to pull off and still make the tension and plot and the conflict work, you know? Lovely review.

I've never heard of this author before, but it's great that you enjoy their work so much!

I think ti would be quite weird for me to read this book right now because I'm rewatching The O.C. at the moment and there are two brothers called Ryan and Trey, haha! What a weird coincidence.

I always want to help the characters who unintentionally (or intentionally) break off relationships because of how they see themselves. They just make me want to sit down and tell them how much they are worth.

This sounds like a fun romance. Glad to see you enjoyed this!