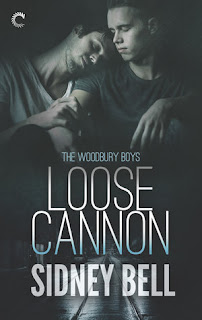 Official Summary: Released after five years in the system for assault, streetwise Edgar-Allen Church is ready to leave the past behind and finally look to his future. In need of a place to crash, he's leaning on Miller Quinn. A patient, solidly masculine pillar of strength and support, Miller has always been there for him—except in the one way Church has wanted the most.

With his staunchly conservative upbringing, Miller has been playing it straight his whole life. Now with Church so close again, it's getting harder to keep his denial intact. As they fumble their way back to friendship after so many years apart, Miller struggles to find the courage to accept who he really is. What he has with Church could be more than desire—it could be love. But it could also mean trouble.

Church's criminal connections are closing in on the both of them, and more than their hearts are at risk. This time, their very lives are on the line.

Review: Loose Cannon was a good read, though it did feel a tad too long. Granted, I think that was due to the fact that it's setting up for the sequel. I'm not sure who the sequel will focus on exactly, but my guess is Ghost, who Church knows from a rehabilitation place called Woodbury (the title of the series).

Besides this, I was very much interested in Church and his friendship with Miller. Of course, it leads to more, but it's not easy to for either of them. Church doesn't feel good enough, and Miller has a lot of ingrained homophobia from his late father - even though he knows there is nothing wrong with being gay and has no qualms about Church being so.

There is a mafia-esque aspect to the story that while still realistic in a sense, brings this story into a different genre than just realistic contemporary. At least in my opinion. All in all though, I liked this one!
Posted by Shooting Stars Mag at 12:00 AM

I can't really get into the mafia romances too much. But the fact that you say it is more realistic makes me think maybe this one might work for me. Great review!

Interesting, realistic and mafia aren't things you'd expect to go ogether one some level I think....which means, I am intrigued. This author certainly seems to have made the mix work.