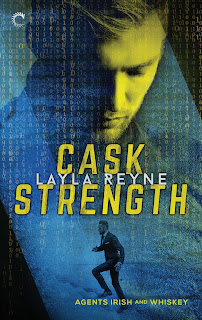 Official Summary: Professionally, the FBI team of Aidan "Irish" Talley and Jameson "Whiskey" Walker is as good as it gets, closing cases faster than any team at the Bureau. Personally, it’s a different story. Aidan’s feelings for Jamie scare the hell out of him: he won’t risk losing another love no matter how heart-tripping the intimacy between them. And loss is a grim reality with the terrorist Renaud still on their trail, leaving a pile of bodies in his wake.

Going undercover on a new case gets them out of town and off the killer's radar. They're assigned to investigate an identity theft ring involving a college basketball team in Jamie's home state, where Jamie's past makes him perfect for the role of coach. But returning to the court brings more than old memories.

As secrets and shocking betrayals abound, none may be more dangerous than the one Jamie’s been keeping: a secret about the death of Aidan’s husband that could blow his partner's world apart and destroy forever the fragile bonds of trust and love building between them.

Review: This is actually the second book in the Agents Irish and Whiskey series. I feel like I've been saying this a lot, but I requested it not realizing there was a book before this one - with the same  characters. While it's something I'd like to read at some point, I didn't feel lost starting with the second book. There is an overarching mystery that the author does a good job filling you in on, and then there is a more prominent mystery that is unique to this particular book. As for Irish and Whiskey, this is the book where the two finally start to admit to more than physical attraction for each other. Well, Whiskey has long fallen for Irish, but after losing his husband, Irish isn't so sure he can handle getting too close to anyone else.

I thought the partnership between these two men was great. Yes, they had the romance element, but in general, they fit well together. They always had each other's back and genuinely cared about the other's safety and well being. The mysteries in the book were well done and I never really knew what was happening throughout. It kept me in suspense and happy to read. The overarching mystery has new layers added to it in this book, which will be focused on in the third book. As for the mystery for this particular book, everything is revealed and wrapped up, so all in all, there isn't much of a cliffhanger. Granted, I still can't wait for the next book!
Posted by Shooting Stars Mag at 12:00 AM

I love no cliffhangers, makes me wonder what the author has up his/her sleeves to surprise us and to keep the series fresh.

I like it when the story is wrapped up well (no cliffhangers lol) even if the overarching series story is advanced. And it's great when you can jump into a book two and not be lost. Sounds like a good one!

Oh my what secret is Jamie hiding?

I have only ever accidentally requested the second book in a series once, and it was more of a companion novel because the main character was different to the first book. But it turned out being a favourite, even though I didn't understand every little thing, haha.

I'm glad you were able to enjoy this one without having read the first! I like the sound of the relationship - I love it when the characters are starting to realise how much they care for each other, both romantically and in a general sense.

Mystery novels are some of my absolute favourites so I think I might have to give this one a try.

It's always great when authors can write characters who really just seem to fit together, and it's more than just attraction. The mystery sounds great too!

Some books can be read out of order, others not so much. I usually try to play it safe and read series in orders as I often enjoy the series more that way. That does sound neat how the author filled you in on the overarching mystery well.The romance and suspense does both sound really well done. Great review!

Great review, I’ll have to add this to my list!
Review of Economics & Finance