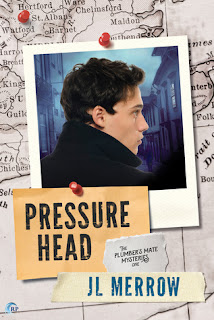 Official Summary (add on Goodreads): Tom Paretski’s not just a plumber with a dodgy hip courtesy of a schoolboy accident. He also has a sixth sense for finding hidden things. Called in by the police to help locate a body near Brock’s Hollow, he’s staggered to encounter Phil Morrison, his old school crush—and the closeted bully whose actions contributed to Tom’s accident.

Phil’s all grown up now, and Tom’s unwilling attraction to him is back with a vengeance. Phil’s now openly gay—and what’s more, he’s interested in Tom’s personal charms as well as his psychic talents. As a private investigator called in by the dead woman’s parents, Phil is sceptical about Tom’s unusual gift, but nevertheless quick to spot its potential to aid him in his work.

The further they go with the investigation, the less they can ignore their shared past, and the more the pressure and the heat build between them. But Tom isn’t certain he wants to know the secrets he’s helping to uncover, while there’s a murderer on the loose who won’t hesitate to kill again—and this uneasy couple is moving right into his sights.

Review: This is the first book in the Plumber’s Mate series and I’m happily going to keep reading them (I’m actually reading the sequel right now, out next month). Tom has a gift of finding things, but only if they were intentionally hidden. He’s friends with one of the cops who brings him in to help find things, and this time, he’s meant to find the body of a girl who was murdered. Of course, he didn’t plan on his old schoolmate Phil to be a private detective looking into the case. These two were, essentially, enemies in school, but Tom’s always been attracted to Phil. The eventual relationship was handled well – I thought that things moved slowly enough, allowing the two to get to know each other in the present day. Tom is also quite funny, which adds a lot of humor and fun!
Posted by Shooting Stars Mag at 12:00 AM

The ability to find things, but only if they're purposely hidden, that sounds unique! I do think enemies to lovers can work well as long as the progression is slow enough, so it sounds like it was done well here! Glad you're enjoying the series :-)

This sounds like a good read. I like the sound of his gift for finding things, that sounds neat. And that's nice the romance moves slowly enough to give them time to get to know each other.

I would thoroughly enjoy Tom's power I think, but I have to admit the idea of a bully and his victim getting together doesn't quite sit well with me. That happened in Glee and it just didn't work -- I do understand the different though that there is an existing attraction I just dunno, I guess.

Wow, romance with an ex-bully makes me definitely intrigued. That seems like a lot to get over. Glad you enjoyed it though.

This one sounds like it includes a bit of a different take on the enemies to lovers trope, because there's also a time gap between the enemies and the lovers aspects of the story! I'm glad you said there was enough build up of the relationship because from what you said (and from what the blurb told me) I feel like this is one relationship that shouldn't be rushed.

I hope you like the sequel as well, Lauren!