Wheels Up by Annabeth Albert 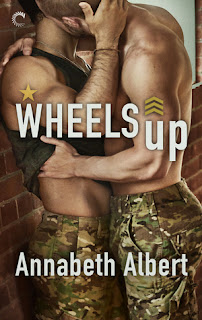 Wheels Up by Annabeth Albert

Official Summary: Lieutenant Dustin Strauss is a reformed man. No longer a twentysomething hell-raiser, he's his SEAL team's new XO-and a man with a secret. Or seven. He's kept his bisexual identity under wraps for years, along with his kinky side and a fondness for the military-themed semianonymous hookup website Joe4Joe. His latest chat buddy is more than a sexy online distraction-they're taking their very not-safe-for-work relationship into real time.

Petty Officer Wes Lowe has a smart mouth, a take-charge attitude and an uncanny ability for making things go boom. The life of an enlisted man isn't always enough to satisfy him, but one wild, no-questions-asked weekend with his online love comes close. When a transfer order comes in, Wes feels ready and centered. He'll make a good impression on his new SEAL team and keep his growing feelings for Dustin on the down low.


But as they log more time online and some very real emotions surface, Dustin and Wes struggle to pretend they're just a harmless fling. And when his commander introduces Dustin to his team's newest member, they're in for the shock of a lifetime...and a crushing disappointment: their difference in ranks means even a friendship without sexual contact could end their navy careers for good.

With their hearts on the line, Dustin and Wes may not survive their next mission, let alone find a way toward a future together.

Review: This is the fourth book in the Out of Uniform series and it was great to get Dustin's story, whose younger brother has his own book (At Attention). Dustin is bisexual but he's never told anyone in his life. He has a gay brother and best friend, so he knows that people would support him. However, he also knows that he's going to disappoint his dad who always tells him at least one son will carry on the family name, settle down and have kids. Instead, he focuses on his military career and ends up making a connection with Wes Lowe on a hookup website called Joe4Joe. Through their time chatting, the two learn a lot about each other and it becomes more than just hooking up. In fact, Wes reaches out to meet up in person when Dustin is in D.C. They have a great time - despite Dustin's nerves - but soon they are back on opposite sides of the U.S. Well, until Wes ends up joining Dustin's team out in California and the two can't even act like friends as Dustin is in charge of Wes and that's fraternization.

Obviously the two eventually end up chatting again more and secretly meeting up at Dustin's condo. Part of it is the physical relationship, but a lot of it is the friendship. They know things about each other that nobody else does, or at least not as well. They are there for each other when they need to be, especially when Wes' sister is back in the hospital for a heart condition she was born with. If you've read the previous books in the series, then I should note that this one has a bit of kink but nothing all that outrageous. I think it would be fine even for people that have never read about it in a romance. I thought the dynamic worked, and it showed different sides to Wes and Dylan. This is a part of them they don't share with other people; only with each other.

I really enjoyed Wheels Up, and I definitely can't wait for more in this series!!
Posted by Shooting Stars Mag at 12:00 AM

Just the blurb makes this sound like it would be full of tension and longing with the whole have-to-pretend-we're-not-even-friends thing. But aww, that's sweet that this isn't just the sexual part of romance but also the friendship. I would like that!

I agree with Kristin, the friendship just makes it all the better.

I like that you read a lot of military romances! Of course, I kinda wish there was a hookup site for me to find a military guy that way as well. :-) Sounds like a good story though, and glad that you liked it!

This one does sound great with how they hook up and then have to hide it when Wes joins Dustin's team. That sure sounds like a complicated situation they get themselves in. And I like it when there is a of friendship in a romance as well and the character know each other well, so I like the sound of that. Great review!

I think I remember reading one of your reviews for the previous book/s in this series! And I have to say I am pretty interested. I don't gravitate much towards straight up romance books (which is odd because I love romance subplots in books, haha), but this series sounds really enjoyable. And this book in particular! I love that there's a focus on the friendship between the two guys, and how they share things with each other. I like that a lot! I hope there's more in this series for you to enjoy, Lauren! And thank you for the lovely review :D