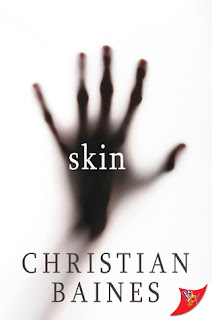 Official Summary (add on Goodreads): Kyle, a young newcomer to New Orleans, is haunted by the memory of his first lover, brutally murdered just outside the French Quarter.

Marc, a young Quarter hustler, is haunted by an eccentric spirit that shares his dreams, and by the handsome but vicious lover who shares his bed.

When the barrier between these men comes down, it will prove thinner than the veil between the living and the dead…or between justice and revenge.

Review: Honestly, I'm not sure what I'd rate this one if I had to. It was definitely not what I expected at all, but it's also a fascinating premise at the same time. I really felt for Kyle whose lover is murdered one night. He's not sure how to keep his memory alive, turning toward some of the spiritual stories he was told about New Orleans.

Marc is someone that made me equally upset and mad. Upset because he's with an abusive lover - though not boyfriend - and he's essentially being used. This makes you mad on his behalf, but it also makes you wonder why he doesn't just leave. Granted, I understand that that's a big question. Where would he go? He doesn't have anyone else. He's almost okay with what he's being given, even if it's awful and heartbreaking. So yes, I'm madder on his behalf than anything because it's horrible that he's found himself in this situation.

The book goes back and forth between Kyle and Marc, and eventually things start to come together, but not until near the end. In fact, I didn't understand why the book was called Skin until the last page of the book and boy is it freaky! There isn't much to say about this one without giving things away, so I'll end it about here. It was an intriguing read but not necessarily one that completely hooked me.
Posted by Shooting Stars Mag at 12:00 AM

I kind of considered reading this because I like some of this author's other books, but I wasn't sure it'd really be paranormal enough for my taste? Or maybe it was that it was fairly short? Idk, I decided not to read it for some reason, but it does sound pretty good, and man, you have me really curious about that title now, haha.

This sounds honestly creepy and intriguing at the same time. And I agree with Kristen, you have me SO curious about the title!

I love the idea of a book with non hetero characters that isn't just about the romance! It seems like there is so much just romance of LGBTQ, and there is so much more than that. This sounds really creepy. Great review!

Sorry it didn't fully hook you. But that ending sounds great, and I love the New Orleans setting.

Huh that does sound like a creepy ending, maybe? Glad you mostly liked it, I know sometimes books aren't great or bad, they're just... okay?

The cover of this one makes it seem like it would be a freaky read, and your comment that you don't find out what the title means until the end makes me very intrigued! I love New Orleans and ghosts, so this might be a TBR for me some day. Great review!

Aw, no. I'm sorry you didn't fall in love with this one, Lauren! From the blurb it sounds like it would be a read that really draws you in, so it's a shame it didn't quite hit the mark for you in that way.

I must say I'm intrigued by what you said about the title and the ending! I almost want to read ti now, just to find out. Ah, the things I do to appease my curiosity, haha.