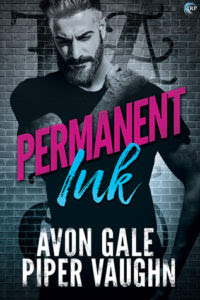 Official Summary: At twenty-three, Poe Montgomery is going nowhere. He still lives in his father’s basement and spends most of his time tagging with his friends. When an arrest lands him in debt, Poe accepts the front desk job at Permanent Ink, the tattoo shop owned by his father’s best friend, Jericho McAslan. Jericho is nearly twice Poe’s age, but with his ink and prematurely graying hair, he quickly takes the starring role in Poe’s hottest fantasies.

Jericho is known for his ability to transform poorly designed tattoos into works of art, but he was once as aimless and misdirected as Poe. Wanting to pay it forward the way someone once did for him, Jericho makes Poe his apprentice and is determined to keep things strictly professional. Easier said than done when Poe makes his interest—and his daddy kink—abundantly clear.

Jericho can’t resist Poe or their intense chemistry for long. But between the age gap, tension with Poe’s father, and Poe’s best friend calling him a sellout, they’ll need to ensure they’re both on the same page before they can rewrite their rocky start into something permanent.

Review: I really liked this one! Despite not having any tattoos myself, I find them fascinating and I enjoy books that focus on them. Poe ends up getting an apprenticeship at Jericho's tattoo shop, because Jericho got a second chance as a young kid and he wants to help someone else. Poe isn't that grateful or interested in the beginning, but he already likes to draw and paint with graffiti, so it isn't long before he realizes what a meaningful art form tattooing can be. Of course, around this same time, Poe and Jericho realize they are both attracted to each other. Not only do they have a big age gap - but Jericho is Poe's dad's best friend. Complicated? Yes, indeed.

Of course, it wouldn't be a romance if these two didn't get together and they do! Their chemistry is fantastic and while Poe likes to use the word "daddy" when it comes to sex, he's not looking for another father figure in his life. I liked that the authors explored this dynamic. Because Jericho is older than Poe, he finds himself wanting to steer Poe in a certain direction and he has to realize that he's Poe's boyfriend. He can't tell him what to do.

I also really liked the relationship between Poe and his best friend Blue (yes, it's his real name). Not that it was entirely healthy, but it was portrayed well. Poe is finally finding stability in his life, but Blue's not and it leads to a lot of issues between them that affect more than just them.

Finally, I should note that yes, Poe's name comes from Edgar Allan Poe and I think it's fantastic. In fact, Poe uses Raven as his graffiti name and tends to paint a lot of skulls and ravens.

Apparently this is the first in the Art and Soul series, so I'm curious to see what comes next!
Posted by Shooting Stars Mag at 12:00 AM

I also think tattoos are fascinating even though I don't have any myself. And ooh, I do like the sound of this relationship dynamic. I like age gap romances, but that's def an added complication with the dad's best friend thing. And that's interesting how the author even explored how Jericho had to remember he was Poe's BF and not try to steer him just because he's older. The friendship sounds complex too.

This is second review for Permanent Ink that I have read, and I am really interested in it! I haven't read many books with a big age gap between the two people in the relationship, and I think this sounds like a good one to start with. I haven't got a tattoo, either, but have been thinking about it for ages! And I've always been fascinated by the artistry behind them, so I have a feeling Id enjoy this aspect of the book, too. I hope you like the next one in the series, Lauren, and wonderful review!

That sounds interesting with how this book focuses on tattoos a bit and that's how the characters met when Poe has an apprenticeship at Jericho's store. Glad to hear this was a good one.

I love books about tattoos myself! I am not a huge fan of romances that are this big of an age gap, but as I like younger men, I guess in a way, it is the same thing, right? :-) Great review!

I have a few tattoos and I think working at a tattoo shop would be so cool. I like the idea of an age gap romance. I totally get liking older men *wink*. Great review!