Love and Other Hot Beverages by Laurie Loft

First off, Happy 4th of July to those in the U.S.! I'm going to see Wonder Woman - again - in a few hours and I'm excited because we're doing 3-D. It's a good movie! I do recommend it if you haven't seen it already. For those out of the U.S., I hope your week is going well. Any fun plans, either way? 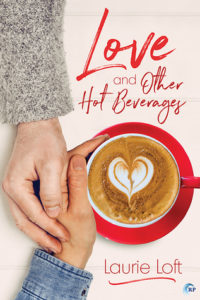 Love and Other Hot Beverages by Laurie Loft
Review by Lauren
source: copy from Netgalley; all opinions are my own
Official Summary: After a rough breakup, Todd Addison wants time alone to grieve. While still dreaming of winning back his ex’s love, he moves across the country and finds work with a construction company. The last thing he needs is the cute office boy developing a crush on him, especially since he’s back in the closet.
Sebastián Nye can’t help feeling sorry for the obviously brokenhearted Todd. Though rebuffed repeatedly, Sebby chisels away at Todd’s resistance, determined to help him forget—a task potentially beyond anyone’s capabilities. He never meant to fall for the poor guy, but he does. Hard.
Desperate to hold on to Todd, Sebby hatches a sneaky plot guaranteed to end Todd’s heartbreak—if Todd doesn’t bail and ruin everything. Just when things can’t get more complicated, Todd’s ex wants him back. And Sebby’s abusive ex is just waiting to catch Sebby alone. Todd and Sebby must decide what’s worth fighting for, what’s worth sacrifice, and what’s worth compromise, or their relationship will begin and end with a broken heart.
Review: To be honest, if this wasn’t a review copy, I probably wouldn’t even write a review for this one. It has an average rating of 2 stars on Goodreads – though I only saw this when I went to say I’d finished. I ended up giving this one 2 stars too. It’s not a DNF so there was enough about the characters and the overall story that made me want to know how it all ended. However, most of the book rubbed me the wrong way.
For one thing, Todd has a very weird way of talking that tended to annoy me throughout the book. He’s a word guy, so it made sense within the story, but it still felt off and like he was trying too hard to sound smart. It’s a bit hard to explain, but it wasn’t working for me.
Another thing I didn’t like about the book is the weird direction it took between Todd and Sebastian – it kind of turned into a “maybe open relationship” sort of deal – and since that came out of the blue for me (based on the summary), it just didn’t work. I’ve read books with more than two people in the relationship but it all depends on how it’s done and the reasoning for it in Love and Other Hot Beverages was a negative for me.
I did care about the characters though. I wanted Todd to find someone who wanted him as much as he wanted them. I wanted Sebastian to find true love instead of exes that use and abuse him. So, it wasn’t all bad. I just can’t say I’d really recommend it in the end!
Posted by Shooting Stars Mag at 10:42 AM

Sounds like one to avoid judging by the other reviews. You did what you could, thanks for sharing!

Ah, that's too bad. But it's great that you at least finished it. The cover gave me good hope for it!

Sorry to hear this one wasn't better. That's always a bummer when you like the characters but the story goes in an iffy direction.

And have fun at Wonder Woman! I still need to see it for the first time... :(

I love that cover, so I can totally understand why you picked this up. Sorry to hear you didn't like it.

I've read about menage or unusual relationships too, but it definitely does depend on how well they're written as to whether I like or believe them. I'm glad you found something you liked about this book, but I'm sorry that it wasn't so great overall.

Oh dear :( This sounded good from the blurb -- I'm sorry this sucked!

Oh no! I'm sorry you didn't love this one, Lauren :( I always find the "smart" talking characters annoying because it just does seem a bit too try-hard. And people like that annoy me in real life, so I have zero patience for them in books.

It's a shame that the open relationships aspect wasn't handled very well. I agree with you that there has to be exploration of the relationship and why that works for them both.

I hope you enjoyed your 3D screening of Wonder Woman! I still need to see it.

I hope you had a great 4th of July and enjoyed seeing the Wonder Women movie again. I haven't seen it yet, but I heard good things about it.

This book does have a cute cover! I am sorry to hear this one rubbed you the wrong way :(. Sometimes someone's manner of speech can really annoy you. I recently had a book were the Scottish accent felt overdone and it really annoyed me, so I get what you mean. Different type of relationships in books can well if well written, sounds like that wasn't quite the case here. And it would've been nice if the blurb hinted to that.