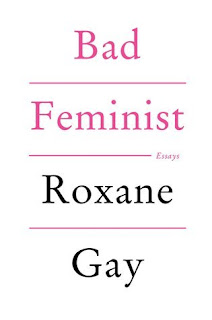 source: copy from e-library; all opinions are my own

Official Summary (add on Goodreads): In these funny and insightful essays, Roxane Gay takes us through the journey of her evolution as a woman of color while also taking readers on a ride through culture of the last few years and commenting on the state of feminism today. The portrait that emerges is not only one of an incredibly insightful woman continually growing to understand herself and our society, but also one of our culture.

Review: Bad Feminist is a book that I've heard a lot about, so I finally decided to check out this book of essays with an overarching theme of feminism. Gay has a good writing style, bringing in personal experience, research, and novels to make her point about various topics. While I'm not a POC of color, like the author, I could still read those essays and be empathetic toward Gay and other POC who don't get to see themselves in popular media or who are treated differently because of the color of their skin. However, I am a woman and feminism in the most simple terms is "equal rights between men and women" and that's something I could definitely relate to and understand. Despite this book being written by a female author, I think men can and should read it too. Feminism isn't anti-men, after all, and if people are anti-men and declaring themselves feminist, then they don't understand the overall goal of the movement.

I liked that Gay states she's a bad feminist, because she doesn't always do the things she knows she should. One small example is that she likes to listen to hip hop/rap music that is very much anti-women. I think this is common for a lot of people, especially if you listen to the radio. You like the voice, the music, and yeah, the lyrics aren't great...but you can't help but nod or even sing along. It doesn't make you a bad person. Maybe it makes you a bit of a bad feminist, but nobody is perfect, and feminism isn't perfect. It's a movement for equality but not everyone follows it in the same way. This is probably the biggest reason it gets such a bad rap, from men and women. Gay talks about women who try to distance themselves from feminism, including big names in pop culture. They are asked if they are a feminist in interviews and they say no. I hate hearing this because they are letting the negative aspects of feminism keep them from saying "yes, I believe in equal rights between men and women." They shouldn't say "I hate men" or "women are better" because that's not feminism, and if they think it is, then that's kind of sad.

Bad Feminist is a bit of an educational experience; it's full of interesting and intelligent essays. While I didn't love everything in the book, I could understand or empathize with most of it. I would certainly recommend people read it to get just one perspective on not only feminism, but inter-sectional feminism (this means you aren't a straight, white woman).

I actually pre-ordered Gay's newest release, a memoir called Hunger, so that I could meet her and get it signed. Unfortunately, I was sick and couldn't attend, but I hadn't picked up my book so I got it from the store yesterday and while it's not personalized, it was signed, so I'm excited about that. I can't wait to read it!

*I'm sharing this review here because the author identifies as LGBT+
Posted by Shooting Stars Mag at 12:00 AM

I am so thoroughly embarrassed at what went down with RG and a blog outlet here one the eve of Hunger's release. Sighs. RG put up with a lot of crap when she was over personally and she didn't need to -- her work is too important and it should be the focus.

I agree with your comment that men can and should read this too. Or books like this. I think a lot of guys think feminism is anti- men too, especially if they don't think about it much, and it certainly can't hurt for guys to see from a woman's perspective. Nice review, thanks for sharing!

I've been wanting to read this - Hunger as well.

For What It's Worth

I actually hadn't heard anything about this book. I completely agree though, it bothers me that people sometimes think feminist means anti-men, when in fact it's the opposite. Feminism supports women and men. And I can definitely relate to that music example. I do like a lot of songs even though I know the lyrics are terrible. But like you said, nobody is perfect. This sounds like a great book!

I have been seeing this book everywhere. Glad to see you mostly liked it. I don't really identify myself as feminist in the mainstream media kind of way so I doubt this would appeal to me. Great review though!

I totally feel like I'm a bad feminist too! I have Snoop Dogg on my running playlist!

Thanks for sharing, you know I don't know if I would say that I was a feminist but I would say regardless of gender we should all be allowed the same rights.