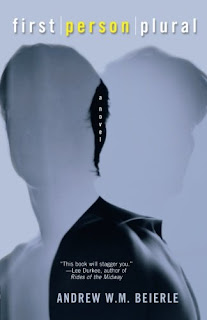 Buy through The Book Depository

bought a copy; all opinions are my own

Official Summary: Owen and Porter Jamison are conjoined twins inhabiting one body with two heads, one torso, and two very different hearts. As children, they're seen as a single entity-Owenandporter, or more often, Porterandowen. As they grow to adulthood, their differences become more pronounced: Porter is outgoing and charismatic while Owen is cerebral and artistic. When Porter becomes a high school jock hero, complete with cheerleader girlfriend, a greater distinction emerges, as Owen gradually comes to realize that he's gay.

Owen, a reluctant romantic, is content at first to settle for unrequited crushes. Porter's unease with his brother's sexuality leaves Owen feeling increasingly alienated from his twin, especially when Porter falls in love with Faith, and Owen becomes the unwilling third side of a complicated love triangle. When Owen finally begins to explore his own desires, the rift grows deeper. As Porter and Owen's carefully balanced arrangement of give-and-take, sacrifice and selfishness, is irrevocably shattered, each twin is left fighting for his relationship-and his future-in a battle of wills where winning seems impossible, and losing unthinkable . .

Review: I've been trying to read some of my own books more these days, especially titles I've had on the shelf for years, like this one. I'm glad that I finally opened this one up because it's such a fascinating premise. Conjoined twins are interesting to me, because it's difficult to think of what life would be like if you were never able to leave someone. What makes First Person Plural even more interesting, of course, is that one of these twins is gay.

Porter is the "alpha" brother if you will. He's the high school jock with the cheerleader girlfriend. On the other hand, you have Owen who is more internal and would rather hide in the background than be a part of the party crowd. First Person Plural is entirely told through Owen's point of view, so it's easy to relate to him more and push most of your sympathy his way. However, one must remember that despite Porter's tendency to take control and make Owen do things his way, he's still in a similar situation as his brother - neither of them can leave each other.

The novel covers a lot of years, going through various stories and moments in the twins' lives. It isn't until about halfway through that the book focuses on a more condensed period of time. This is when Porter has fallen for a young girl named Faith, and now Owen has to deal with a serious relationship in Porter's life that equally affects him. There is the issue of sex, of course, which is a topic discussed throughout the book. While there is descriptions of and discussions about various aspects of sex, I wouldn't say it was overly graphic. It seemed to be just enough to get the point across without overdoing things, which was nice. Obviously, sex isn't something you can ignore when one of the twins has fallen for someone (first Porter, but later Owen does too) because the brothers have to figure out how to deal with each other's different sexualities. Porter is ultimately more and more accepting of Owen, but he wants there to be a clear line that shows everyone he is not gay. Owen is more understanding about the issue. He wants Porter to be able to find and keep love, and when it comes to Faith, he doesn't want her to be uncomfortable with having him there.

Things never stay good for long though. It always seems to come down to Porter and Owen. They have to find what works for them both, despite what others in their life believe or can deal with. It isn't always easy, but as a reader, you hope they can make it work and find happiness.

First Personal Plural was a fascinating book, though sometimes I wished we had more about Owen's life. It seemed to focus a lot on Porter... and Owen having to deal with Porter's wants and needs. Also, there were things that Owen seemed to repeat throughout the novel concerning his relationship with Porter, like how he's always second-best and the child that their parents didn't really want. It's certainly a sensitive topic for him, but it's a bit repetitive after awhile. Overall, I am glad to have read this one!

*This was originally posted on my blog ShootingStarsMag in 2013, but I wanted to share it here as a Repost Review since it contains LGBT characters/themes*
Posted by Shooting Stars Mag at 12:00 AM

What an interesting plot. It is an interesting conundrum with the MC's being twins, but they couldn't be more different if they tried. This sounds good!

That's nice you're making time to read some of the books which has been on your shelves for years. That sounds interesting and a bit unusual that it covers so any years, doesn't it feel rushed? It sounds like a good book and how it deals wiht the two brothers.

Oh my goodness, I have never heard of a book about conjoined twins.

Good for you getting some of your older books cleared, I am hoping to do the same myself!

It absolutely sounds like an interesting one and looks like it would get you thinking how you'd feel in their shoes. Sounds like it had a few small flaws, but overall I'm glad you enjoyed it! It seems like a good thought-provoking read :D