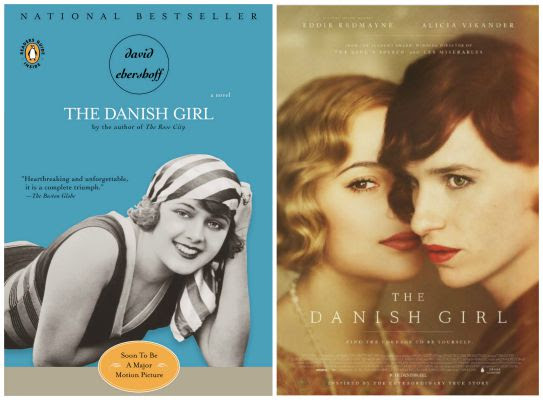 For those that may be new to the blog, Repost Reviews are reviews that I originally posted on Shooting Stars Mag, and that I want to share here! With The Danish Girl now in theaters (movie poster above on the right, book cover the left) and the two main actors being nominated for Oscars, I thought it was important that I share my review for the book The Danish Girl, which I originally read and reviewed in 2010. I mention a movie being in the works then and now it's finally out! I'll have a review of the film later in the week.

Repost Review of The Danish Girl by David Ebershoff

copy for review; all opinions are my own

Summary from Author Site: Inspired by the true story of Danish painter Einar Wegener and his California-born wife, this tender portrait of a marriage asks: What do you do when someone you love wants to change? It starts with a question, a simple favor asked of a husband by his wife on an afternoon chilled by the Baltic wind while both are painting in their studio. Her portrait model has canceled, and would he mind slipping into a pair of women's shoes and stockings for a few moments so she can finish the painting on time. Of course, he answers. Anything at all. With that, one of the most passionate and unusual love stories of the twentieth century begins.

My Review: The Danish Girl is a beautifully written story about the love between two people, one of which just happens to have been born a girl named Lili stuck inside a boy named Einar. Einar's wife, Greta, gives up her own needs to make sure that Lili can grow and become who she was meant to be. It's a brave idea, especially in the 1930's when many are telling Greta that her husband is not well and could be a harm to himself or society...Greta, however, believes otherwise.

Ebershoff, just like the painters' story he weaves, has painted a world that is both wonderful and awful all at the same time. The settings and world around these characters is carefully constructed so that the reader can fall into their lives, as if reading about a pair of friends who live away.

Overall, The Danish Girl was a fast read and leaves you with many thoughts. What is the true meaning of love, inside and out of marriage? Could you give up the man you love, knowing that once the girl in him is nurtered, there is no turning back and you have to move on alone?

I'm grateful that I was allowed to take part in the TLC tour. I think this is a wonderful book for many to read and is surely something that you would find discussed in Oprah's bookclub. I just realized from the author's site that film plans are in the works and I really hope it works out. This is one story that is sure to come alive on screen and deals with a topic that should be discussed with grace and understanding...just like the book did.

If you click the link before the summary, it will bring you to the Danish Girl page on Ebershoff's site, where you can find links to an excerpt, information on the film, and quotes from others about the novel.
Posted by Shooting Stars Mag at 11:50 PM

This trailer gives me the chills every time I see it. I am seriously looking forward to your review bc it'll be awhile until I get to see it. I looked them up on wikipedia and what a tragic love story they had.

I so want to watch this movie. It looks like it has a lot of substance versus the I Am Cait series :/

Oh yes, I saw information about this movie come up when I googled more about Eddie Redmayne who is going to play Newt Scamander in Fantastic Beasts and Where to Find Them. I believe this movie came out in 2015 and is loosely based on real artists. I'm so glad you enjoyed the book.

The film looks beautiful, the book certainly looks worth checking out!