Waiting on Wednesday: My Year Zero by Rachel Gold

Waiting on Wednesday is hosted by Breaking the Spine 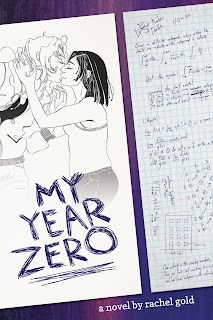 My Year Zero by Rachel Gold

Official Summary: Lauren thinks she has a pretty good life—so why is it that she feels crazy most of the time? She figures it’s nothing she can’t fix by getting her first girlfriend and doing better at school. But how is she ever going to find a girlfriend in Duluth, Minnesota?

When she meets a group of kids who are telling a science fiction story online and gets invited down to the Twin Cities, she gets more attention than she ever expected, from two very different girls: charming Sierra and troublesome Blake.

Blake helps Lauren understand that she’s not the crazy one in her life. But Blake's attention—and insights into life and living with bipolar disorder—threaten to destroy everything Lauren has created for herself, including her relationship with Sierra.

What do you think about this one? It looks like it will be a really fun read. I like that Lauren meets kids telling a science fiction story online. I'm all about those nerdy/dorky characters! I can usually relate. This one looks like it will include a bit of a love triangle, but since it involves all girls, I think I can handle it! It'll be different from the standard two guys love the same girl trope.

What are you waiting on?

Happy Thanksgiving to those in the U.S.!
Posted by Shooting Stars Mag at 1:11 PM

I haven't heard of this one yet so thank you for sharing it!!

This is new to me. I hope you enjoy reading it. Thanks for stopping by My WoW.

This book caught my eye when the cover was released over at Gay YA. I think it sounds so awesome :D I have also heard super good things about Rachel Gold, which bodes well for this one. I'm not the biggest fan of love triangles, but this one sounds more interesting than the ones we see all the time in YA.

I'm not usually a huge fan of love triangles but I'd be interested to see how this one works out. I quite like the cover of this book too (and I'm intrigued by all the equations).

The cover wouldn't have catched my attention, but the blurb sounds good. I like how they meet by writing a science fiction story online. I don't mind love triangles as long as they're done well.

I didn't know about this one and it sounds really good :) I'm waiting for Santa, to tell you the truth :p I hear he's bringing me books!!!

Here for the lovely nerds! I LOVE it when people who are nerds are treated like actual characters :)