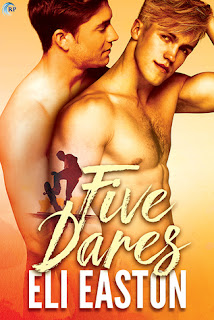 Official Summary: Andy Tyler has been the class daredevil since middle school. Over the years, he’s convinced his best friend, Jake Masterson, to perform some dangerous-looking stunts with him. But the dare they attempt on the night of their college graduation goes sideways. The firecrackers explode too soon and both of them end up with badly burned palms.

But hey, nothing gets the “terrible two-o” down for long, and they recuperate in style at Andy’s family cottage in Cape Cod . As the weeks go by, both Andy and Jake grow frustrated over the inability to use their hands for all sorts of daily activities—including getting off. So Andy begins a new series of dares that don’t just cross the friendship line, they obliterate it.

But what might be mere sexual relief to Andy is serious business to Jake, who only recently got over years of secret pining for his straight best friend. Inevitably, the burns heal, summer ends, and hearts are broken. To fix things, Andy will have to face the greatest dare of all.

Review (add on Goodreads): Five Dares has an interesting premise, I will admit, but I love friends to lovers romances so I had to check it out. I ended up really enjoying this one. Jake has been in love with Andy for years, but he hasn't even come out to his friend. He wants things to stay the same and he's afraid that if he does admit he likes guys, that's one step closer to blurting out his feelings for Andy. Now - before you start wondering if this is a gay for you type of romance, it's not. Yes, Andy does end up admitting his own feelings for Jake (shouldn't be a spoiler; it's a romance after all!) but he also states that he's bisexual. I always appreciate characters that are bisexual too; it's not always gay or straight, you know? More books should explore that aspect of sexuality.

Five Dares is a fun read - obviously the main dare that really pushes the guys together is based around sex, but there are flashbacks to when they are growing up and you learn about the other dares Andy comes up with. These range from a bit gross to putting-your-life-in-your-hands. It really shows the dynamics of Andy and Jake's friendship and I thought they really tied in well with the story (read it and you'll understand!)
Posted by Shooting Stars Mag at 12:00 AM

Oh hello, this looks like a fun read -- as does the cover! The author seems to have found the right notes to convey this relationship through the flashbacks and the current timeline. Since flashbacks are tough for me to get into, I can definitely appreciate that!

Friends to lovers is great! It just feels the most sweet and believable to me. And it sounds like these two really do have some interesting friendship dynamics. Great review!