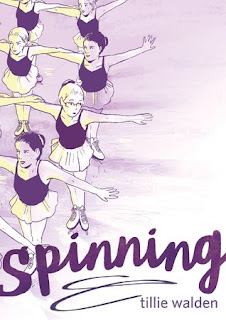 Official Summary (add on Goodreads): It was the same every morning. Wake up, grab the ice skates, and head to the rink while the world was still dark.
Weekends were spent in glitter and tights at competitions. Perform. Smile. And do it again.
She was good. She won. And she hated it.

For ten years, figure skating was Tillie Walden's life. She woke before dawn for morning lessons, went straight to group practice after school, and spent weekends competing at ice rinks across the state. It was a central piece of her identity, her safe haven from the stress of school, bullies, and family. But over time, as she switched schools, got into art, and fell in love with her first girlfriend, she began to question how the close-minded world of figure skating fit in with the rest of her life, and whether all the work was worth it given the reality: that she, and her friends on the figure skating team, were nowhere close to Olympic hopefuls. It all led to one question: What was the point? The more Tillie thought about it, the more Tillie realized she'd outgrown her passion--and she finally needed to find her own voice.

Review: I love graphic memoirs; it's such an interesting way to learn about a person. Spinning is about the time in Tillie Walden's life when she was a figure skater. She wasn't aiming for the Olympics, but she did practice before and after school and took part in competitions. After awhile though, she started to realize that figure skating wasn't necessarily her lifelong dream. She was falling more in love with art. She was also falling for girls, something that she didn't let anyone in her figure skating life know about.

Spinning is a thick novel, but it reads quick. The artwork is done in black and white, with some strategic yellow here and there. It's easy to read and I think a lot of teens could relate to Tillie. You don't have to like someone of the same sex, or even be involved in something so intense as figure skating. Spinning, at its heart, is about learning who you are and growing into the person you want to be.
Posted by Shooting Stars Mag at 12:00 AM

I think that learning about who you are never stops and something like this is a good reminder of how difficult it can be and how worth it is even if you don't like what you learn, you know? Great review Lauren, much food for thought!

Oh it's a graphic novel and it's about a real person? How neat! I can definitely see how you wouldn't need to be LGBT or a figure skater to enjoy this and take something from it. We all change and grow as we go through life and figure out who we are and what we want. Great review!

This sounds good! Figure skating must be a really tough place to be in as well, you either make it or you don't. There's kind of no in-between, I think? Good review :)

I've been very curious about this one. Your review made me think I need to make sure to get it for my school library. Great review!