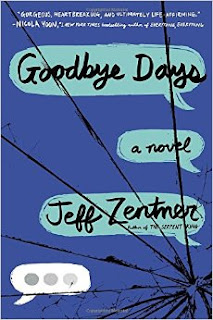 source: copy from BloggingForBooks; all opinions are my own

Official Summary: One day Carver Briggs had it all—three best friends, a supportive family, and a reputation as a talented writer at his high school, Nashville Academy for the Arts.

The next day he lost it all when he sent a simple text to his friend Mars, right before Mars, Eli, and Blake were killed in a car crash.

Now Carver can’t stop blaming himself for the accident, and he’s not the only one. Eli’s twin sister is trying to freeze him out of school with her death-ray stare. And Mars’s father, a powerful judge, is pressuring the district attorney to open a criminal investigation into Carver’s actions.

Luckily, Carver has some unexpected allies: Eli’s girlfriend, the only person to stand by him at school; Dr. Mendez, his new therapist; and Blake’s grandmother, who asks Carver to spend a Goodbye Day with her to share their memories and say a proper goodbye to his friend.

Soon the other families are asking for a Goodbye Day with Carver, but he’s unsure of their motives. Will they all be able to make peace with their losses, or will these Goodbye Days bring Carver one step closer to a complete breakdown or—even worse—prison?

Review: This book has a very intriguing question at the heart of it: if someone gets in a car accident due to texting, who's to blame? The person who texted - knowing they were driving - or the driver who tried to text back, while driving? Well, the main character in Goodbye Days, Carver, is the first half of that question. He texted one of his three best friends - knowing they were driving - and they got into a car accident, killing all three of the young men. Now Carver is afraid that charges will be pressed against him and he'll end up in jail. He's got a great lawyer, and he's finally seeing a psychiatrist, but the guilt eats away at Carver day after day.

While this sounds like a heartbreaking book - and it can be - it's also full of humor and hope. There are flashbacks to Carver meeting his three friends, as well as ordinary moments of them just having fun. The relationship between all three boys felt very realistic and I loved getting a glimpse of the life they all had BEFORE.

I have yet to read The Serpent King by this author, but it's one I do want to get to soon. I highly recommend reading Goodbye Days whether you read the author's debut or not. They aren't connected, so no need to worry about that. I found this book to be upsetting and wonderful, often all at the same time. I wanted to yell at some of the adults in Carver's life for not understanding that he is a child too. I thought the idea of doing a Goodbye Day with the various parents/adults of the boys lost - Blake, Eli, Mars-  was a really brilliant idea.

Some were much harder for Carver than others, but he starts with saying goodbye to Blake with Blake's grandma, who loves Carver and would never blame him. This goodbye day is obviously my favorite. I think all of them helped Carver heal a little bit though, even if it opened up some of the wounds at the same time.

Very good; I recommend! I'm sharing this review here because one of my Carver's friends is gay, and there are a couple really wonderful moments in the book!
Posted by Shooting Stars Mag at 12:00 AM

I love the idea behind this, and I can see the power in this narrative -- especially emotionally. Great review!

I've seen a few reviews for this now and it sounds amazing- I like how there's both humor and heartbreak (that sounds weird I guess, but I mean obviously it sounds like a moving book). Between this and serpent King I've heard good things about Zentner, and I'm seriously thinking of getting this one. Thanks- great review!

You really must read Serpent King. It's so good. I started this a while back but I kept stopping because I feel like it's going to destroy me.

Oh man, sounds like a must read for me. I still want to read The Serpent King too.

Yikes, that sounds really heavy with the whole texting and guilt thing. But I think it's great when an author can combine something serious with humor and Hope!

I think this sounds like a tragic book, which probably means I won't pick it up. I just don't have it in me! (She says, after just finishing They Both Die at the End by Adam Silvera.)

It's good that this book wasn't just about tragedy and death, and that the author was able to bring in some humour and lightness.

I hate it when adults aren't supportive of the teens in my life, so I can totally understand your frustration on that part.