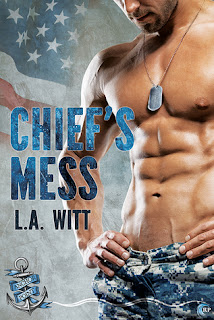 Official Summary (add on Goodreads): Anthony Talbot is in Anchor Point to visit family, but after two days of strife, he needs a break. A local gay bar is calling his name.
When Chief Noah Jackson sees that red head stroll into the club, he immediately wants him. They’re perfectly matched, and before long, they’re burning up the sheets. Noah can’t get enough. Anthony can’t stay in Oregon for long, but as soon as he leaves, he’s counting down the days until he can fly back for more. And between his increasingly frequent visits, there’s always phone sex, sexting, webcams . . . anything they can get.

But Noah’s got a carefully crafted façade, and Anthony can’t help noticing the slowly forming cracks. The scent of alcohol in the middle of the day. The extra drinks at dinner. The hint of red in his eyes. Anthony knows what it means. He doesn’t want to believe it, but he’s seen this before, and there’s no denying it. If Noah doesn’t get his downward spiral under control, he’s going to lose both his career and the first man he’s ever really loved.

Review: Chief's Mess is the third book in the Anchor Point series, which features a bunch of Navy men falling in love. I'd suggest reading the books in order, or at least the second one before you start Chief's Mess since the couple in the 2nd book appears a few times in this one. At any rate, I really love Witt and her novels so I'd suggest reading all these books just because of that!

Anyway, back to Chief's Mess. I will say that this is probably my least favorite of the three books out so far, but that doesn't mean I didn't like it. I think my main - and really only - issue is that there is so much of their physical relationship throughout the book and sometimes I wanted a bit more. Now, I think the book is written well and you definitely get to know the two guys - Anthony and Noah - but every now and then I just wanted a bit more of the everyday, emotional side of their relationship. Besides that, this was a good one.

Anthony meets Noah in a bar while in Anchor Point with his sister. It's supposed to be a one night stand - and that turns into a week-long thing while Anthony is still in town. However, once Anthony leaves, they both realize they want more and that begins their long-distance relationship. Because they are able to see each other fairly regularly, it works. They get closer and it soon becomes more than the sex for both of them. They are genuinely falling for each other. However, Anthony is starting to notice that Noah drinks...a lot. He's not sure if it's really a problem or if he's projecting his sister's ex onto Noah.

All in all, I love the Anchor Point series. While I might have wished for a little less physical and a little more emotional, I feel like you still get enough of the emotional to make you fall for these guys. I definitely rooted them on! I can't wait for the fourth novel!
Posted by Shooting Stars Mag at 12:00 AM

You have gotta watch those redheads!! Thanks for sharing!

This sounds like a great series! While I enjoy physical scenes, I also want to read about a couple's relationship outside of that, there has to be a good balance between the two. I haven't read a lot of books with a long distance relationship, so that sounds pretty original. Great review!

I think maybe sometimes I'm in the minority in that I like more physical scenes than other people do, but it always needs to be important to the story, or at least fit in seamlessly and not just be gratuitous. I do love that cover! Great review!

I love the idea of a defence force romance series! There's just something about it that appeals to me, haha.

Although it's a shame that this was your least favourite in the series so far! I definitely prefer more balance between physical and emotional connection, so I think I would feel largely the same as you do. It's great that you still enjoyed it overall! Hopefully the fourth book will be a super emotional one :)

Want To Increase Your ClickBank Banner Commissions And Traffic?