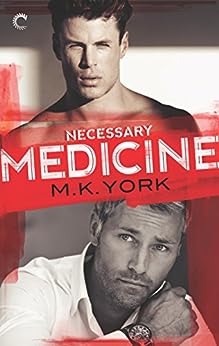 Official Summary: In the high-intensity world of hospital residency programs, there's no room for romance. So it's a good thing for first-year surgical resident Neil Carmona that his crush on the gorgeous cardiologist Eli Newcombe is sheer fantasy. Not only is the sexy doctor Neil's superior, he's also recently divorced.
As Neil's skill as a surgeon grows, so does his friendship with Eli, and his silent, hopeless longing for more. It isn't until Neil's final year that Eli at last admits his own deepest desires. But Neil's joy is short-lived: Eli has no intention of pursuing a relationship. Their positions in the hospital would make it unethical, even if he was emotionally ready for someone new. Wounded and furious, Neil is determined to forget about Eli once and for all. But when a near-tragedy strikes, a new question arises: Is a life without love—without Neil—a greater risk than laying his heart on the line?

Review: When the book starts, Neil is a medical student and then he's an intern, and then a fellow. The book moves through the years a bit, but I found it easy enough to follow so I was never confused as to where Neil was in his journey to becoming an attending doctor. As for Eli, he's a cardiologist who Neil first sees in medical school, when Eli is there to give a speech. Once Neil is working at the hospital, he's path crosses with Eli more and more often. While Neil has been harboring a crush on Eli for years, he doesn't think the feeling is at mutual since Eli has an ex wife and has never once mentioned being bisexual. As such, Neil tries to enjoy their budding friendship without getting too attached, and it works for awhile.

Obviously Eli has feelings for Neil too. I don't think that's a spoiler as it's in the summary, and that's just how these stories go, right? At the same time, Eli isn't willing to risk either of their jobs or reputations by acting on those feelings and it definitely upsets Neil. This makes sense though; Neil has had these feelings for years and when he finally realizes that they are reciprocated, he's pushed away. Despite this, things do end up okay for the two, but I don't want to go into too many details and spoil the whole story. The details are the story after all.

One thing that I will note though is that the book felt a bit too long, as the author focuses a lot on the medical aspect of the story. While I understood most of the details, it did feel like a bit much in parts. Granted, the author is a medical student so it does make sense. While some of the descriptions could have been left out, having some does make the hospital and its inhabitants feel that much more realistic. What tends to suffer from these details is that the actual romance doesn't really appear until maybe halfway through the book. I was never bored reading the book, but I was definitely more interested in the relationship aspect of the book.

I think the medical jargon would have bogged me down a bit but it sounds like a good read! Thanks for sharing!

I haven't read a lot of stories with doctors as the main characters, not sure if I'd enjoy all the medical parts of the story if you think it felt too long. But it sounds like overall it was a pretty good read for you. Great review!

Oh hello silver fox on the cover! I was just reading a book where the legal aspect was just too much and it wasn't need. It maded it drag and it also took me out of the book entirely.

I haven't read many books that took place over a longer period of time like that. It can be interesting. It sounds like a good read overall. Too bad that the book felt a bit long and there was a bit too much focus on the medical aspect. Although it does sound realistic and like the authors knows what she's talking about.

I love it when authors write about their own field of knowledge because it gives it that added level of authenticity! It's a shame that you felt like there was maybe TOO much of the medical stuff, but I imagine it would be hard to cut them out if that's what the author is passionate about.

It's rare that books are set over a span of years, and I like the sound of how the relationship progresses in this one. Even though it must be painful for Neil to know that his feelings are reciprocated, but that Eli isn't willing to do anything about it.

Yay for the happy ending, though!