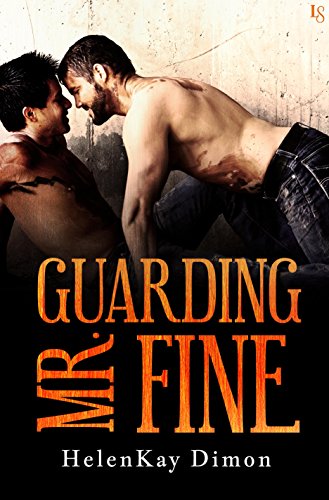 Official Summary: As an agent with the CIA’s special activities division, Seth Lang lives for risk—and yet he’s stuck playing bodyguard to the U.S. consul general in Munich. Although Seth’s last assignment nearly killed him, babysitting some desk jockey in a suit sounds way too easy. But when he lays eyes on the new top man, tactical expert Rick Fine, Seth’s thrilled to see just how hard this job is going to get. Mr. Tall, Dark, and Quiet has a body worth guarding—and he requires hands-on attention day and night.
Dispatched to a German consulate to expose the murder of his predecessor, Rick finds himself in an extremely vulnerable position. He needs a man like Seth—in so many ways. This mission will inevitably plunge them both into jeopardy, but each new threat only brings them closer. Rick just hopes that he can keep his deepest, darkest secret hidden—or else risk imperiling a relationship they’re both fighting for their lives to protect.

Review: Guarding Mr. Fine is the third book in the Tough Love series, and while I've loved them all, I think this might be my favorite. I just loved the relationship between Rick and Seth. There is a big secret that involves both of them - which only Rick is aware of - but it's a secret that makes sense to be kept, at least while the mission is happening. It adds drama to the end of the book, but nothing unwarranted or too over the top.

As for the rest of the book, this is essentially a mystery novel, and I loved that. Sure, it has plenty of romance, but it also has suspense and intrigue. Rick is sure that the former ambassador to Germany was involved in something shady and that his death is more than a suicide. He has to keep this theory mostly a secret though, so that if something is going on, they aren't spooked and hide away. It soon becomes clear that Rick is correct as someone tries to take Rick out. They don't know Seth though. He's been in the CIA for years and he's an excellent "body guard." He may have feelings for Rick, but that doesn't distract Seth. It might just make him more determined to bring down whoever would dare kill Rick.

Definitely a great read! I'll include links to the other books in the series below in case you want to read in order!

Check out the Tough Love series on Amazon - I'm an affiliate; I get a small percent of any sale.

The premise sounds like a lot of fun. I enjoy a good mystery as well and these types of characters seem like a blast to read about.

This sounds exactly like the type of romance story that I like to read! Glad you liked it, great review!

I am glad to hear you enjoyed this series o far and this might be your favorite so far. I can enjoy drama in a book as long as it makes sense and is not too much over the top. I am curious about the mystery plot line in this one. Great review!

Yay for finding your favourite book in the series! I absolutely love it when that happens.

As much as I love mystery/thrillers for their mystery and thrills, I also really love it when there is romance, as well. Romance plots and subplots just make me happy, haha. So I'm glad that this book had a good dose of both!

I'll have to check this series out, too. I am always up for more mystery/thrillers, especially LGBTQIA+ ones.

Oh no, now I am busting to know the secret !! ( awesome review btw!)