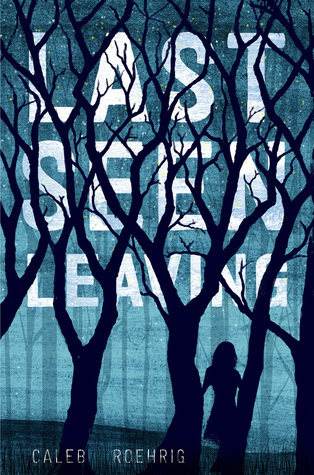 source: copy from BEA16; all opinions are my own

Official Summary: Flynn's girlfriend has disappeared. How can he uncover her secrets without revealing his own?
Flynn's girlfriend, January, is missing. The cops are asking questions he can't answer, and her friends are telling stories that don't add up. All eyes are on Flynn—as January's boyfriend, he must know something.But Flynn has a secret of his own. And as he struggles to uncover the truth about January's disappearance, he must also face the truth about himself.

Review: When researching the authors/books that would be at Book Expo America in May, I came across Caleb Roehrig's novel, Last Seen Leaving. It comes two things that I absolutely love - LGBT+ characters and a mystery! After reading this one, I can definitely say you should check it out. The mystery of January's disappearance is perfect for the fall season, though you can enjoy it at any time.

I think it's fairly obvious from the summary that Flynn is gay. That's the "truth about himself" that the official summary talks about. Therefore, when his girlfriend January goes missing, there is a lot that Flynn can't talk about concerning their relationship and the last night they spent together. Don't worry, the secret doesn't stay hidden for too long, so there shouldn't be any yelling of "OMG, Flynn, tell someone!" It's actually after Flynn finally comes out that things get really interesting.

Last Seen Leaving is full of little twists and turns that I loved. Whether you guess a culprit or not, you're bound to be surprised by something in this novel. I loved the character of Flynn. He's scared about coming out, but then he's also determined to do right by January now that she's gone. He wants to know what happened to her and most of the things he does to find answers is understandable, since I know that this is something that people are often bothered by in teen mysteries.

What I really loved about this book is that it's more than just a who done it or a murder mystery. Yes, there is all of that, but it's also about growing up and learning to understand why people do the things they do. Again, I highly recommend this one and I can't wait for more by this author!
Posted by Shooting Stars Mag at 12:00 AM

Sounds great! I love a good who-done-it and it sounds like this one has the added factor of keeping secrets and then what happens when it's revealed. I am glad you enjoyed it :D

That's neat this was a mystery with LBGT characters. And that sounds nice that the secrets doesn't stay a secret too long, as i definitely had those moments with some books where I felt like yelling tell someone. It sounds like the characters acted realistically as well, which is good. Great review!

I hadn't heard a lot about this one, but it sounds like one I need to get into my school library. Great review! You really sparked my interest!

Great review! This is a book that I was already looking forward to, but after reading this, I'm more excited than ever :)

I'm so glad we both liked this one so much! It was definitely a stand out mystery/thriller for me. I really loved what you said about it not just being a murder mystery because you're right - there was so much more to this story, and it opened up the discussion of so many things. I am really excited to see what Roehrig comes up with next, because he's definitely an author that I'm keeping an eye on!