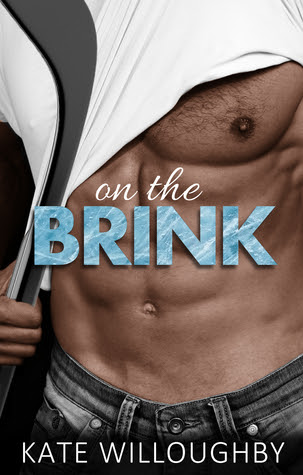 Official Summary: Due to popular demand, Kate Willoughby brings you Hart Griffin and Jeremy Fenton's origin story. Find out how these two met and fell in love...
Holtzer University junior Hart Griffin won't let anything interfere with his future as a professional hockey player. No way, no how. He's the star forward of his college team and a first round NHL draft pick.One hot night with a male super fan calls into question everything Hart thought he knew about his sexuality and launches him on a soul-searching journey in which nothing is as it seems and his entire world is turned upside down.

Review: To be honest, I haven't read any of the other books written by Kate Willoughby but I came across this one on Netgalley and was curious to see how these two guys came together. Of course, I hadn't read anything about Hart and Jeremy before, but I like "origin" stories so I thought it would be a nice story, and it was! This is essentially a novella and it's something you can read on its own. I never felt confused or like I was missing something about any of the other characters.

As for the actual story, Jeremy is out and proud of that fact, with a secret crush on college hockey player, Hart. He knows he doesn't really stand a chance, but that all changes one night after a game when Hart offers Jeremy a ride home after seeing that his jeep has been graffiti-ed. Hart has had an idea for awhile that he might like guys, but he's never tried anything until that night. So whoo boy- it's definitely a sexual and intense moment. After it ends though, the two have to figure out how they are going to continue their relationship - if they have one.

It's friendship at first, because Hart can't admit his true feelings, but you know that things are obviously going to progress and they do. Hart and Jeremy really get to know each other and see that they have a lot in common, besides the initial physical connection. Since you know the two get together, you are ultimately just reading to follow that journey, but it's a good one!
Posted by Shooting Stars Mag at 12:00 AM

This sounds like a really good story. And that cover is definitely hot! Great review!

I always like it when you can read a book or novella in a series and still be able to understand everything okay!

This one sounds like it was really enjoyable. I love it when a couple starts off as friends, because it can give so much more padding to their relationship.

I really like the fact that Hart already had an idea that he was interested in guys. I think there are too many books that fall into the "gay for you" trope when it comes to m/m, so it's good that this one didn't!

That's nice you could read this one as standalone as well, probably because it's an origin story you don't have to know anything of what happens next. And it's fun to read the journey even if you know where they'll end up.