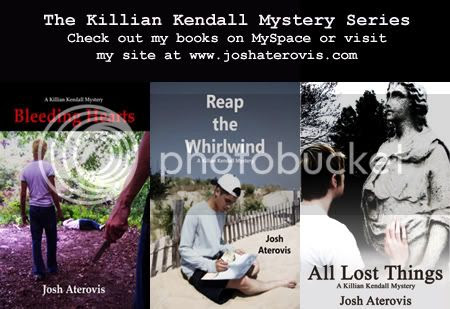 There are currently four books in the Killian Kendall series by Josh Aterovis. They are all mysteries and usually deal with some sort of murder that Killian is either directly involved in or becomes involved in do to someone else in his life. I've read and reviewed the first two for Shooting Stars Mag awhile ago, but more recently, I read the All Lost Things and The Truth of Yesterday. For more information on all of the books in the series, visit PD Publishing.

All Lost Things was interesting as Killian's ex asks for his help to prove his new boyfriend's innocence. Yeah, tricky situation right there. Sure, this is what Killian does...but can he keep his feelings out of the situation long enough to prove if this guy really is the killer or not?

As for The Truth of Yesterday, Killian must figure out just who murdered male escort, Paul...who happens to be the ex of Killian's currrent boyfriend, Micah. Again, can Killian's luck get any worse? Killian's more unique abilities start to come into play during this book (as I don't believe it's really touched on earlier...I could be mistaken though!) and you start to delve a bit more into the world of spirits and the afterlife.

I didn't want to do traditional reviews for these books since it's been awhile since I read them. Sorry for not getting the reviews posted faster! However, I think it's nice to spotlight the entire series since there are already four books.

I think this is a fun series. It's got the mystery, the suspense, the romance. It's a bit unbelievable in certain ways though. It seems like so many people that surround Killian are gay, which hey, could happen...but it's not as likely. All of the murder and crime also seems a bit much, and it makes me think of certain crime shows on TV. Regardless, you might enjoy these! It doesn't hurt to grab the first one and see what you think.

I'm curious for the next book, A Change of Worlds. I don't have a release date for it yet, but the summary looks good...Killian's ex seems to be back in the picture!!
Posted by Shooting Stars Mag at 7:51 PM

What an interesting series. They do sound super mysterious. I love mysteries!