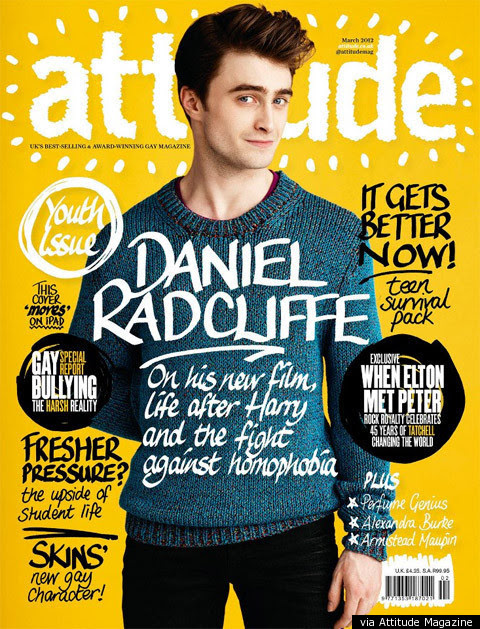 The above magazine, Attitude, can be found in England...however, the Huffington Post gives us a few interesting quotes from Dan Radcliffe about LGBT rights and who he has a Talent Crush on (yeah, it's a guy...and I agree!)

From what we can read of the interview, it's great! I wish I had the entire thing. Dan is always really well-spoken and if you read the blog, you know that I'm a huge fan of his in general, but I also really love that he's so outspoken about his support for LGBT rights.

Courtesy of HuffPost from Attitude:


"The ultimate reason gay marriage should be legalized everywhere is because, as a kid, you look to your mum and dad and they're married, then you look at the gay couple who've been together for the same amount of time, but because they can't get married their relationship doesn't seem the same," Radcliffe told the magazine. "Gay people should have equality in law everywhere. If you grow up as a young gay man knowing you don't have the same opportunities as everyone else, you're going to feel victimized and massive prejudice towards you."
Well said, Dan. I totally agree. Leave your thoughts in the comments!
Posted by Shooting Stars Mag at 4:26 PM

I would like to get my hands on that interview to. It sounds really interesting.

Love the quote! I didn't realize that Radcliffe was so supportive of LGBT rights, but it only makes me like him more!