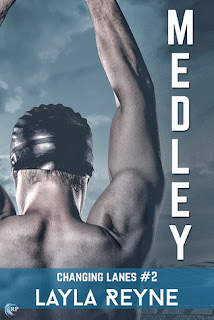 Official Summary (add to Goodreads): Sebastian Stewart was never Mr. Dependable; he was more the good-time guy who only wanted to swim, party, and ink tattoos. Until he cost his team the Olympic gold four years ago. Bas is determined to do right this time around—by his medley relay team and his rookie mentee.

Jacob Burrows is in over his head. The Olympic experience—from the hazing, to the endless practices, to the unrelenting media—makes the shy nineteen-year-old’s head spin. He’s trying to be everything to everyone while trying not to fall for his gorgeous tattooed teammate who just gets him—gets his need to fix things, his dorky pirate quips, and his bisexuality.

When Jacob falters under the stress, threatening his individual races and the medley relay gold, he needs Bas’s help to escape from drowning. Bas, however, fearing a repeat of his mistakes four years ago, pushes Jacob away, sure he’ll only let Jacob down. But the only path to salvaging gold is for Jacob to finally ask for what he needs—the heart of the man he loves—and for Bas to become the dependable one.

Review: I love Layla Reyne, and I highly recommend her books. Medley is the second book in what I believe is a duology called Changing Lanes. Readers meet Sebastian - Bas - and Jacob in the first book, Relay, which focuses on two other members of their Olympic swimming team. First off, I love the setting of the Olympics. I know we just had the Winter Olympics, and swimming is a Summer sport, but it was still fun to read this book around actual Olympic time. While you can easily read just Medley, as events in Relay are explained/summed up, I do think both books are really good, so it's your choice! While I really liked Medley, and I would recommend the book, I do know that some readers might get frustrated with the back and forth between Bas and Jacob, though it's really just Bas' fault.

However, it made sense to me because Bas is trying to make up for something he did in the previous Olympics and not let his team down, while also trying to take care of Jacob, who is a first time Olympic swimmer. When it's obvious that Jacob wants more, Bas has a hard time saying no - because he wants more too. However, he also thinks he's going to ruin things for his teammates if he gives in too much, so it's a lot of pushing Jacob away, believing Jacob is better off without him anyway, since he has so much still ahead of him (there is a bit of an age difference here; Jacob is 19 and Bas is later 20's I believe).

Despite the back and forth, I was still intrigued by the story and I knew Bas and Jacob would get it together at some point. I'd say the first book is more 4 stars, and this is 3.5, but that doesn't mean I didn't highly enjoy both of them!!
Posted by Shooting Stars Mag at 12:00 AM

Hoping this is still up on NG. Would love to read it and get an intro. I really like the sound of it.

The Olympics does seem like it'd be a really cool setting for a book! Idk, I find that a lot of times when people get frustrated with characters for not communicating or for being indecisive and stuff like that, I don't mind because I find it realistic. Sounds like a good book, glad you liked it!

Loving the setting of the Olympics!! I think tge back and forth can get tiring but it sounds lije the author pulls it off