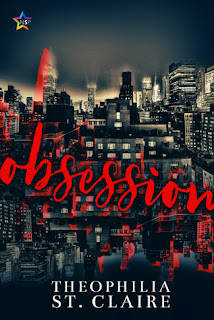 Official Summary (add on Goodreads): Nick has a hard life. Not only is he working at an East Harlem bar to make ends meet and pay for his sister’s medical expenses, he’s also on the run from a shady past that’s surely catching up to him.

Most people think Claude has it easy due to the money and luxury surrounding him. But they would be wrong. Firmly trapped beneath his stern father’s thumb, Claude’s pre-determined life took a nosedive when his lover, Christian, left him a year ago.

When the two meet, sparks do not instantly fly between them. Claude thinks Nick is his ex-lover returned to him. Nick thinks Claude is crazy.

However, circumstances bring these two men together. And despite Claude’s jealousy and possessive nature, Nick is falling for him. Sick of being mistaken for Claude’s ex, Nick is willing to find out what happened to him—the real Christian. He’ll have to if he wants a stable relationship with Claude. How Claude takes the truth, however, is the only thing that scares him.

Review: Obsession is a dark read, so it’s definitely not for everyone. Nick falls for a man named Claude, but Claude only see his ex when he looks at Nick. It’s a dysfunctional, abusive relationship, but I think the author did a good job showing why Nick stayed. The book also offers up some sympathy for Claude, though obviously not so much where what he does to Nick can be overlooked or forgiven. I thought the book was a relatively intriguing, quick read, but I have to say that I wasn’t a huge fan of the ending. Most of it ends well, except for one aspect. I’d be curious to see what other people who read the book think of this moment, but I don’t want to give it away for fear of any spoilers.
Posted by Shooting Stars Mag at 12:00 AM

Ooh dark. I like dark. But I like how it seems like the author showed something really important (dysfunctional, abusive relationships) and portrayed it well. It's good to have books show *why* people often stay. And that the abuser isn't usually 100% bad, but that still doesn't excuse the behavior. Sorry the ending didn't work so great for you. I hope you find someone to discuss it with.

That does sound like it could be an intense story. I'm interested in what it is that makes him think Claude is his past lover. Great review!

I can be quite a big fan of dark, and that synopsis definitely has me intrigued. I'm going to head over to Goodreads and scope this book out a bit because I think I might like it! Though now I am a bit wary of the ending. I am one of those readers whose feelings on a book can be made or broken by the ending so I hope I'm not too dissatisfied. Thank you for the review, Lauren! :D

Dark has its place I think, but I can’t deny Claude seems somewhat scary in his obsession too ....

This sounds like a fun dark read. I do love a good dark romance. Thanks for sharing your honest opinion on this one. I might have to check it out!