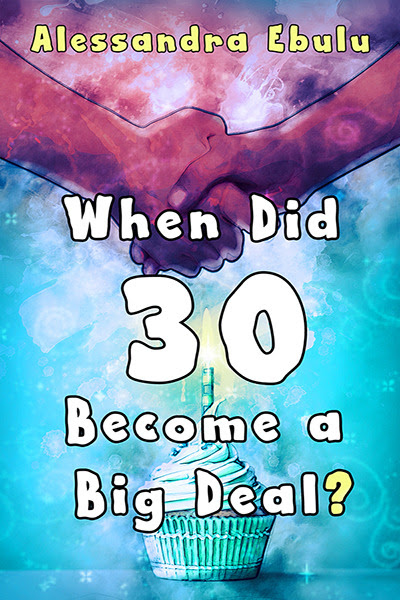 Official Summary: Sanmi wakes up on the morning of his thirtieth birthday to alarming news: his best friend Bidemi reminding him of the pact they’d made when they were seven that they would marry each other should they still be single when they turn thirty. He brushes it off as a joke, but then Bidemi, whom he always thought was straight, begins to court him…

Review: When it comes to LGBT+ fiction, I really love the whole friends to lovers trope. When Did 30 Become A Big Deal? is a short novel that focuses on just that. Sanmi has just turned thirty and his best friend for 20 years, Bidemi, reminds him of the pact they made as kids. If neither of them were married by age 30, they would marry each other. Sanmi assumes Bidemi is messing with him, since he's never got the inkling that Bidemi is gay. But Bidemi is completely serious and he's willing to do whatever it takes to make sure that Sanmi sees him in a new light.

One of the things that I LOVED about this book is that it's set in Nigeria, so being out and open about homosexuality isn't safe. It's also exciting to read a book set in a different country, especially one I don't think I've ever read about. Sanmi and Bidemi are great friends and it was fun seeing the two of them grow closer in a new way. This isn't a gay-for-you novel, though I don't always mind those, in case you are worried about that particular trope.

There were a variety of side characters that really added to the story, like Sanmi's other best friend from work and both of the boy's parents. All of them are pretty supportive about Sanmi's sexuality and they don't seem to mind the idea of Sanmi settling down with his best friend.

This was a short and sweet novel, with some added humor, which is always a plus!

Interested? Check it out on Amazon here (I'm an affiliate: I get a small percent of any sale)
Posted by Shooting Stars Mag at 12:00 AM

Oh what a cute premise, haha. This sounds really sweet and fun, and I've never read anything set in Nigeria. Great review!

Wow, I love the idea behind this book! You hear this kind of premise with male and female friends, but never like this! Glad you enjoyed it, and it sounds like it is a good one. Great review!

Oh my, what a great book this sounds like! The friends to lovers is always a win, and I can appreciate the diversity the setting in Nigeria brings.

Ohhh this one sounds really good! I'm a big fan of friends to lovers romances too. I don't believe that I've ever read anything that took place in Nigeria. Great review!

I love the love to friends theme too. Sounds good.

I really like the sound of this book! I just looked up the author and they were born in Nigeria, which is amazing. I would love to read this book for the setting and for the fact that I have never read a book with a Nigerian character. The storyline sounds pretty cute, as well. I'll have to see if I can grab a copy!

Thanks for your review! I probably would have passed by the book based on cover alone (I'm turning 40 this year, and so I thought this was a memoir kind of book about someone turning 30, lol). But the story sounds cute, and the Nigerian setting is definitely one I don't encounter often.