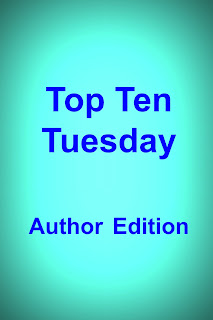 Top Ten Tuesday is hosted by The Broke and the Bookish

I'm back with another Top Ten Tuesday: Author Edition! Yesterday I reviewed the third book in the #gaymers series, Connection Error, so today I'm happy to introduce you all to author Annabeth Albert. I highly recommend you check her and her books out!


Top Ten Book Series That should be TV Shows

Thanks so much for having me today! I love TV, especially fall TV as the new shows premiere, but I also love books. I love shows with long-ranging story arcs like Call the Midwife, House of Cards, Gilmore Girls, and more, and I think there are a number of good book series that could lend themselves well to TV.

Tessa Dare’s Spindle Cove Series. Why should Austen have all the fun for period drama? I’d sacrifice a corset and stage a tea party for a show about the lovely spinsters of Spindle Cove or other Dare series. Her empowered heroines would be perfect for today’s viewers.

Kris Ripper’s Queers of La Vista series. Like Cousins’ series, this series has a variety of pairings, and a lovely, soap opera feel and California setting that would make a great updated Melrose Place of sorts—but with happy endings for everyone, of course.

ZA Maxfield’s Cowboy series. Can we please have a series about gay cowboys where no one dies? Surely I’m not the only one who would be all over a contemporary western drama with rugged cowboys who love cowboys.

Cara McKenna’s Desert Dog series. With the popularity of motorcycle clubs and anti-heroes, this series would appeal to a wide segment of viewers, and her hunky heroes and spunky heroines provide enough sexual tension for several seasons of drama.

AM Arthur’s Belonging series. I love how all her Carina Press series interrelate and I can totally see a great show centered around the coffee shop and friendship group at the heart of this universe.

Keira Andrew’s Forbidden Rumspringa series. I would totally glom a TV show where an Amish teenager struggles with coming out, and this series is just dynamite with the supporting cast as well. I could totally see this as an ensemble drama.

KJ Charles’s Society of Gentleman series. Why should women get all the historical fun? This series centered around a group of wealthy friends sharing a certain common interest is ridiculously well-done, and would make a superb period drama.

Jenn Burke and Kelly Jensen’s Chaos Station series. This series would make a great space opera for all the Stargate and similar fans.

Thank you so much for letting me visit today! What book series would YOU like to see made into a show?
Posted by Shooting Stars Mag at 12:00 AM

I love the reasons behind why they would all make good shows. I've never read any of those series. I'm always down for a tea party and corset show. I think I'd go with the Throne of Glass series. I'd LOVE to see those assassins, Kings, Queens, Fae and magic all in a TV show.

I am not familiar with these books but I marvel at how the LGBT is now included in primetime. I remember the days where same-sex kissing scenes are unheard of, now every TV show has their own token gay/lesbian couple or character. I still dislike how they're stereotyping and jumping on the PC bandwagon, but it's a start

So, I haven't really read any of the books she's mentioned, and am only familiar with a few. But, her descriptions of them do make several sound like they would be shows I would give a chance. Thanks for sharing this!

I haven't read any of these series, but the author does make me curious about them with her reasons for why they would make a good tv series. Fun list!


There are so many series I would love to see at TV shows. Great list.