I Got to Meet Chris Colfer (Glee Star)

photo from Fox.com
This past Sunday, I saw Chris Colfer at a local bookstore where he did a signing for his debut novel, The Land of Stories: The Wishing Spell, which I pre-ordered in order to attend the signing. Now I have a lovely autographed copy and I got to stand in Chris' prescence for like 5 seconds. He was too adorable though!
I hope to have a full Author Signing post up soon with photos of Chris and whatnot...and as soon as I get a chance to read his book, I'll be posting a review on this blog as well.
Do you have a copy of The Wishing Spell?! Did you get to see Chris live?
Posted by Shooting Stars Mag at 7:46 PM 1 comment:

Email ThisBlogThis!Share to TwitterShare to FacebookShare to Pinterest
Labels: chris colfer, The Land of Stories

The New Art of Coming Out: Jim Parsons and Anderson Cooper

source
This was actually last week's issue of Entertainment Weekly and I apologize for not letting you know ahead of time. I'm sure you can still find this issue online or at a Half-Price books type of store. At any rate, as you can see from the cover, the main article is all about The New Art of Coming Out. There is still fan fare surrounding a new celebrity coming out but it's definitely less than it was and more and more celebrities are coming out in very understated ways. I think this is great. It's your choice to be open about your private life, but I know being a celebrity makes it more noticeable, so it's your choice to come out however you like.

Jim Parsons recently came out in an interview about his role on broadway in Harvey. The fact that he was gay was actually mentioned by the interviewer and not Jim at all, which is very cool, in my opinion. If you read the article online, the news isn't even revealed until the third (and final) page:


“The Normal Heart” resonated with him on a few levels: Mr. Parsons is gay and in a 10-year relationship, and working with an ensemble again onstage was like nourishment, he said.
The reason I'm finally posting about all of this (as I meant to do a post when Jim Parsons came out...by the way, he plays Sheldon Cooper on The Big Bang Theory) today is because newsman Anderson Cooper came out!
Anderson Cooper 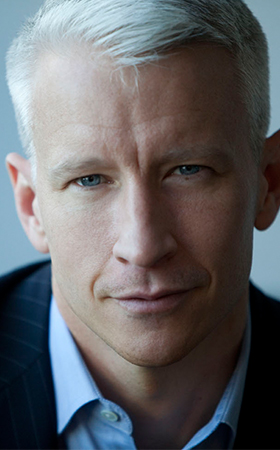 source
There have been all sorts of rumors about Cooper being gay, and personally, I always figured he was...but I think it's his choice to come out whenever he wants and it's great that he finally has in hopes that it will help others. The article I linked to above includes some of what Cooper wrote but I really enjoyed this: "In a perfect world, I don't think it's anyone else's business, but I do think there is value in standing up and being counted."
Posted by Shooting Stars Mag at 4:16 PM 1 comment: