The Heart As He Hears It + High Contrast 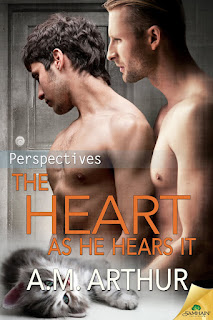 The Heart As He Hears It by A.M. Arthur

Putting Jon and Isaac together doesn't seem like it would work, but it does.

I loved that these guys help each other. It's not just about Jon helping Isaac face the world. Isaac also helps Jon, which makes it a great friendship, and eventual relationship. I loved that things moved slowly between these two. It wouldn't have been realistic at all to have Jon and Isaac become in any way physical too quick.

There is another aspect of this book beyond the relationship that adds some mystery and suspense. That's all I'll say because I don't want to give anything anyway. It's doe well, and it's interesting, though it's not a needed aspect of the story. It would have been find to focus just on Jon, Isaac, and Henry's relationships and lives.

Official Summary: Jacob Shain is your average member of Generation Screwed. He has a boring internship, no cash flow, and a tiny NYC apartment he has to share with Ethan, his much-cooler, tattoo artist twin brother. Not to mention his love life is DOA. At least, until his brother’s shop hires on a new piercer, and Jacob’s humdrum life takes a turn for the weird.Cody Turner is gorgeous, funny and kind—everything Jacob wants in a boyfriend.Except for the way he refuses to talk about his past, or where he lives, or anything about his personal life.When Ethan is arrested while on a mission of mercy, the reason Cody is so tight lipped comes to light. And while Jacob and Cody fight to understand the depth of their feelings for one another, the police dogs catch their scent. So does the local mob.Now Jacob has to make the hardest choice of his life: stay safe like a good boy, or dive headfirst into a world he barely understands…and hope Cody is there to break his fall.

Review: I loved High Contrast, and I'm so curious to see what the next book in this series will be about (or rather who the book will be about, as I assume it will deal with another couple). For this one, the story revolved around Jacob Shain and Cody Turner. Jacob has an office job, but he feels like he's boring compared to his brother who co-owns a tattoo studio. New employee Cody Turner definitely catches Jacob's attention, and it takes a bit to finally realize that Cody is just as interested in Jacob. They don't start going out right away though...Cody tries to put the brakes on that, for reasons that aren't completely revealed until the end. Regardless, Bowery gives you enough information about these characters so that you aren't annoyed by instead of being curious and wanting to know more.

I loved the everyday, regular guy nature of Jacob. He definitely puts himself out there more in the book because while the relationship between him and Cody is unfolding, a lot of slightly unbelievable moments occur. I don't mean unbelievable in a bad way though - it's just not your everyday love story. I also don't want to give too much away. Let's just say that Cody is carrying secrets from his past, a life that he wants to get away from. It catches up to him though, as these things do, and it takes more than Jacob and Cody to fix things. I loved how the whole tattoo shop, plus Jacob's best friend and his twin Ethan's girlfriend, Andi. It's a true family there and it was great getting to know all of them. Plus, their relationships - especially between Jacob and twin Ethan - felt very real, and helps ground the crazy that surrounds them.
Posted by Shooting Stars Mag at 12:00 AM

These sound like some good books, romance, but also more of a story than just a romance. The first one sounds more sentimental. The second one maybe a little more of a suspenseful story. Great reviews!

These sound good. I like the sound of how in the first book both characters help each other and things eventually grow into a relationship. And there's a cat on the cover, so cute!
I am glad to hear you enjoyed these!

They both sounds good to time. The first one interests me the most.

The Heart As He Hears It sounds really quite lovely. I like it when relationships don't move too quickly - especially when characters have things they need to deal with and overcome. So I'm glad that this book didn't push the relationship between Jon and Isaac. It's a shame that there was an aspect in the story that didn't feel fully needed, though.

High Contrast looks pretty interesting! Realistic relationships are always so wonderful to read about, especially when they're grounded in a high stakes kind of storyline - which sounds like this book. I always want to know everything about a character, so I think the secret aspect of this book would definitely keep me reading. I hope you like the sequel!