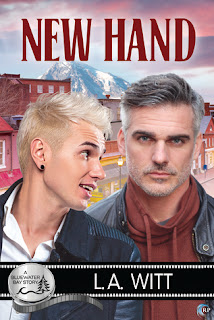 New Hand by L.A. Witt
Review by Lauren
Source: copy from Netgalley; all opinions are my own
Official Summary (add on Goodreads): Months after his husband’s death, Garrett Blaine desperately needs a fresh start. He sells his house in Seattle, leaves his accounting job, and starts bartending in Bluewater Bay. There he meets a man who wakes up his nearly forgotten libido.
Jesse Connelly’s friend with benefits bolted after Jesse disclosed his HIV status. Stood up and stinging, Jesse tries to drown his sorrows . . . and finds an unexpected connection with a lonely bartender.
Jesse and Garrett quickly bond over a shared love of comics and card games, and they can’t get enough of each other between the sheets. Not even a bumpy start and a fifteen-year age gap can derail them as they go from strangers to lovers, then friends, then much more.
But as Garrett’s feelings for Jesse deepen, so does his grief for the man he lost—especially as he sees hints of his late husband in his new boyfriend. Now Garrett has to figure out if Jesse is his second chance at true love, or if Jesse’s just filling in for the man he’s never fully grieved. And he needs to figure it out soon, because Jesse’s starting to wonder the same thing.


Review: New Hand is the 23rd and final book in the Bluewater Bay series. While these can all be read on their own, if you want to read things a bit in order, I suggest Outside the Lines and then New Hand as you meet Jesse in OTL. Otherwise, you can easily read New Hand on its own. This book is about Jesse, who works at the comic book shop with Simon and Lydia Derry (from Outside the Lines) and who finds it difficult to maintain a relationship with anyone as he’s been HIV positive for years. However, when he’s stood up one night, he meets new bartender Garrett, who has recently lost his husband. Garrett doesn’t think he’ll fall for anyone so soon, but he can’t deny the feelings he’s getting for Jesse. I really liked how Witt handled both Garrett’s loss and Jesse’s status. These are two very big things in the characters’ lives and I thought they were portrayed accurately and with respect, which is important. This is also an age-difference romance, which I find I’ve come to really enjoy lately!
Posted by Shooting Stars Mag at 8:28 PM

Oh my, this sounds like such an awfully sad story -- and uplifting in that they do find each other. it'd be interesting to see how this relationship would progress in the years ahead. Thanks for the heads up, Lauren and Happy New Year!

Hmm, I was curious how the HIV status would work with the new guy. Did Garrett's husband die of AIDS?

Once again, you always find books w/ premises I've never seen. But that's great that this book includes something so important and handles it with respect. Glad you liked this! I also kind of like age gap romances.

That sounds interesting how the author handles those big things in the characters lives and handles it accurately and with respect. Nice you also see some of the characters of Outside the Lines in this one. great review!

Same comment as before, but I realised my wording could have been better!

My gosh! 23 books in a series is incredible! Have you read them all, Lauren? I think it must have been sad for the author to say goodbye to the series. I know I would have been a little heartbroken if it were me!

I'm glad that the author handled two big themes with respect. I don't think I've ever read a book with a HIV positive MC, so I think that having that rep in this book is a good thing. Maybe I need to read Outside the Lines and then this one. I love the fact he works in a comic store, too! I love comics :)

I don't think I have read an age gap romance so this book looks like it will open up my reading quite a bit!