Squared Away by Annabeth Albert 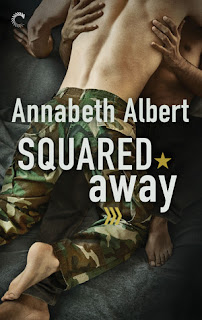 Squared Away by Annabeth Albert

Official Summary (add to Goodreads): In the wake of tragedy, SEAL Mark Whitley rushed stateside to act as guardian to his sister’s three young children. But a conflicting will could give custody to someone else—someone Mark remembers as a too young, too hot, wild party boy. Even after six years, Mark can’t shake the memory of his close encounter with Isaiah James, or face up to what it says about his own sexuality.

Isaiah’s totally over the crush that made him proposition Mark all those years ago. In fact, he’s done with crushing on the wrong men altogether. For now, he’s throwing himself into proving he’s the best person to care for his cousin’s kids. But there’s no denying there’s something sexy about a big, tough military man with a baby in his arms.

As the legal details get sorted out, their long-buried attraction resurfaces, leading to intimate evenings after the kids are tucked in. A forever future is within reach for all of them, if only Mark can find the courage he needs to trust Isaiah with his secrets—and his heart.

Review: Squared Away is the fifth book in the Out of Uniform series and I just loved it so much! This book just really pulls at your heartstrings. Isaiah's cousin - who is more like his brother - and Mark's sister are married and when they die in a car accident, the two men are left with three kids. Except, there are conflicting thoughts via the wills as to who exactly is meant to look after them. Mark has a strong sense of duty and as a navy doctor, he doesn't let go of control well. He believes that he should look after the kids because it's his sister, he's older, and he still very much sees Isaiah as a teenager with a crush on him. Isaiah's a lot different than Mark gives him credit for though, and the book really does explore their slowly budding relationship.

One of the things that I really loved about Squared Away is that Mark is gray ace (which essentially is between asexuality and sexuality). Mark has never been interested in intimate relationships until Isaiah, which is why he's never had a relationship work in the past. However, being with Isaiah doesn't magically mean he wants to have sex with him all the time. I liked how the author explored Mark's sexuality, especially since he was trying to figure it out as the book went along as well. Isaiah was really sweet and patient, and he never pushed Mark for more. Just having Mark was enough for him, which should be how any relationship is, whether the couple has a lot of sex or not. That can be the the whole basis of a relationship after all.

There is a bit of drama, but I thought it was realistic in terms of the situation and the character's personalities, but I also really like how Mark and Isaiah try and work things out in as mature a way as possible - at least in front of the kids. Those kids are definitely the ones they worry about the most in all the chaos of finding them their new "forever family" if you will.

I do recommend this series. You can read these as stand-alones, but some of the previous characters do show up here and there throughout.
Posted by Shooting Stars Mag at 12:00 AM

So cool that the author is tackling a different aspect of sexuality and doing it so well!

I like when we get a glimpse into sexualities that we don't normally hear about. It is definitely something that intrigues me. Sounds like you really enjoyed this one as well!

Oh, huh, that's a different premise. The slow romance sounds great, and so does the way the asexuality was portrayed. Glad it was good!

The premise for this story sounds a little heartbreaking, but also I think it would make for a good plot, with emotions being so high. I love the fact that one of the main characters is grey ace! I don't think I've ever read about a grey ace character (ace, yes, and a demi side character) so I am pretty keen for the book for that alone. I'm glad you liked it so much, Lauren! If there's another book in the series I hope it lives up to it :)

Our bureau is the only area known to provide friendly and esthetical girlfriend (escort service in jaipur) and companion which you can't deny in dreamy state. It is because of the services of the sexy babes are extremely warmth, esthetical and perfect in each and every sense. The instant can always be memorable and lingering. It may be so good a grin will flash on mind memory the experience. They are largely of college going pupils of hi society WHO enjoys to serve them beforehand of fellows.