Back to You by Chris Scully 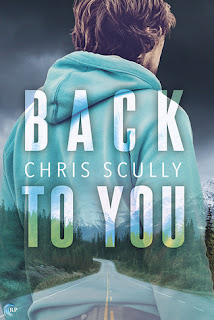 Back to You by Chris Scully

Official Summary: Journalist Alex Buchanan has come home to the remote British Columbia town he grew up in, but only because his estranged father is dying. For Alex, the homecoming holds a mix of memories, mostly bad. The only bright spot is reconnecting with Benji Morning, the childhood friend he never truly forgot. As boys, the strength of their bond had frightened Alex. But now that he’s confident in his bisexuality, he’s drawn back to quiet, soft-spoken Ben.

Ben isn’t the same boy Alex left behind, though. His life has been overshadowed by the disappearance of his sister two decades earlier, and now a new break in the case threatens to undo the peace he’s worked so hard to attain.

As Alex struggles to repair the relationship with his father before it’s too late, he finds himself caught up in a twenty-year-old mystery, a story he never expected, and a shocking truth that could affect his and Ben’s future together.

Review: I really love m/m romance, but I also like when there is an added genre on top of it because then you not only get the romance, you get a fully fledged story apart from the two main characters. In Back to You, Alex comes home after receiving a phone call from his sister telling him their father is dying. Alex isn't on good terms with his dad, but he goes thinking he could write an article about it. Of course, once he's home again, he has to reach out to his childhood friend, Ben, who kissed him right before Alex' family moved at the age of 13. He hasn't seen or spoken to Ben since, but he's always held a flame for him.

I love friends to lover romances, and it was really nice to see Ben and Alex getting to know each other again after all the years in between. I also appreciated that while Ben is gay, Alex is actually bisexual, and nobody shames him for that and says he can't be. Bisexuality is valid too and I love when authors have characters that are bi.

As for the other aspect of this book, there is a 20-year mystery of what happened to Ben's older sister, who disappeared one day. Alex decides to help investigate, unsure if he really wants to know the answers. It was a really good mystery -I was fairly surprised by the outcome, but it's a good one! It definitely ends on a hopeful note for most people involved.

Nice that in addition to the romance the mystery was well done. This does sound good, and I love the sound of the british Columbia setting too. And not having seen each other since the moment they had- ah the dramatic possibilities. :)

It is always good to have a good romance as part of a story. Sounds like this was a good one for you! Great review!

This sounds wonderful -- a complicated story and a gorgeous romance too. I love the family angle too.

I also like when the romance is just part of the plot. And ooh this sounds like it has a great mystery too!

Romance and mystery, always a winning combination!!! Thanks for sharing!

I also like romances, but I also like it when there's another genre added. Sounds like a good mix of genres in this one, with a good romance and mystery. I like a good friend to lovers romance. That sounds neat how Alex is actually bisexual. Great review!

Ah, I really love it when people connect after time apart! Especially when they ~liked~ each other when they were younger, and still feel the same. It's just a storyline that I really like <3

Also YAY for no-one erasing or trying to invalidate Alex's bisexuality! That is definitely a good thing. Too many m/m romances are "gay for you" and completely dismiss bisexuality as an identity.

I love the sound of the added mystery element, too! I think I will have to check this one out, as there are heaps of things I'm liking the sound of.