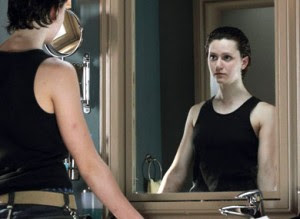 Photo Source
The much-loved series Degrassi is introducing their first ever transgender character this season, Season 10 by the way, which has started now. The character of Adam (shown in the above pictured) is played by Jordan Todosey, who is most notably known for playing little sister Lizzie on Life With Derek. Adam was physically born a girl but identifies as male...and even has a homophobic stepbrother named Drew who is sure to make things interesting for Adam.

Personally, I watch Degrassi off and on. It's not because I don't like the show...but rather I didn't always have the channel that plays the show so I've missed random bits through the Next Generation. (I really need to get the DVD's). Anyway, I think it's great they are finally having a transgender character, which will hopefully raise more awareness and understanding. After all, they've already focused on girls and boys that are gay, lesbian, and bi. This is the next step and I think if anyone can make it work, it would be Degrassi. I  can't wait to see Jordan in her new role.

One of the ways Degrassi has been promoting the new season is through these carnival themed commercials. There are two seperate ones that showcase some old and new characters, giving you a look into what might be happening with them this season. If you watch the one below, you will see the character of Adam, dressed as a boy, but seeing a girl in all the carnival mirrors. I think it's very interesting and a fun promo. Also, this video is the full promo...so it's both commercials together.

Discuss: Do you watch or will you start watching Degrassi? What are your thoughts about a transgender character? Comment as you will!


Written by: Lauren
Posted by Shooting Stars Mag at 3:39 PM

OMG! I'm soo behind on Degrassi I don't know what's going on! I can't believe that's little Lizzie! I do love Degrassi. They're never afraid to "go there".

I know, I was shocked to see it was her as well. I'm definitely glad they are a show that will deal with various types of people and issues. It's great, because it needs to be out there.

This show needs to end.

Degrassi is the bomb. its corny as hell but always hits everything on the nose.

i love your blog, by the way.